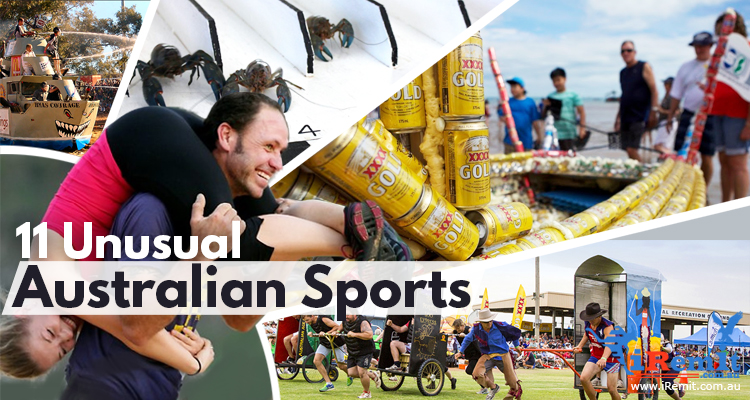 Australia is almost synonymous with sports especially with footy, cricket, NFL and every other sport you may think of.

But Aussies’ love for sport does not end with the pros… it extends to almost everything else.

Welcome to Australia, the land of… weird competitive races.

The Dunny Race at the Sunshine Coast happens every January 26.

The race is pretty simple, run with as a group with old portable loos.

Yes, portable loos converted as a carriage looking thing complete with wheels and handles and pulled by, well, men.

Last time, the winners took home a prized toilet seat trophy and a tile of the Dunny Race Champions of the World.

If that was not exciting enough, then try visiting Brisbane’s Story Bridge Hotel.

Don’t forget to bring your own cockroach. Yep.

Australia Day is also the date of the Annual Cockroach World Championships.

If you do not have a cockroach with you, you can buy one at $5 and watch the little pests run around and jump over a hose to win the contest.

Another sporting event from this state is the Cane Toad Racing at the Arcadia Hotel, Magnetic Island.

You can catch this race every Wednesday at around 7:30 in the evening.

Just a little trivia, cane toads are not native to Australia. They were imported from the US to eliminate pest in the state’s cane fields (hence the name). However, their ability to survive, rate of reproduction, migration speed, had many Australians worried.

This prey looking predator has body parts that can release poisonous substance causing a mild hallucinogenic effect on other animals. These frogs can cause an ecosystem imbalance in different areas invaded.

They reached an estimated 2 billion in numbers and may take over the continent making governments and organizations urge communities to actively participate in riding of them.

There is also the Yabbie Race Festival happening every August at Charleville.

These crayfishes simply need to reach outside of a round canvass about 3 metres far. But since they are mere crustaceans, running is not exactly their thing. They’ rather lounge to the chagrin of those betting on them.

Before August ends, Birdsville holds the Not the Birdsville Races. There is the real Birdsville race with real horses racing against each other.

But what most people anticipate is the Not the Birdsville Race – when patrons race reel and string drawn wooden horses.

Birdsville is known to house just 120 people but during the festival 130 horses are brought here along with some 6,000 tourist and 80,000 cans of beer.

Of course, other states have something to offer as well. Next up, Northern Territory.

Every July, Darwin holds a Beer Can Regatta. This is their way of recycling those mountains of empty beer cans.

All they have to do is to race with their own self-made beer can boat all the way to Mindi beach although most sink at the Arafura sea.

This activity was initiated by the Lion’s Clubs of Darwin.

Also in July at Alice Springs is the annual Camel Cup.

The first two mentioned above may not compare in the weirdness meter of Queensland but maybe this would: the Henley-on-Todd Regatta.

Sounds quite normal – except, it’s a regatta in the middle of a desert.

That’s right, a boat race in Alice Springs. How? Imagine the Flinstones.

Residents make a hole on their boat so they can run with it on the very dry Todd River. If you are just visiting and you want to join, you can race with the pre-built vessels.

Then, if your team wins, you get to battle it out with two other teams using one of three battleships – Buccaneers, Navy or Vikings. Each team will be equipped with flour, water bomb canons and high powered hoses. All in good fun.

Of course, New South Wales is on the list too.

Every March, Singleton couples get ready for the Wife Carrying Championships.

This is a real championship, the winner of the 200 metre obstacle run gets to enter the same championship in Finland plus get the same amount of beer as the weight of the wife.

Oh, and the rule does not strictly say you have to carry your own wife.

For dog lovers, see what residents from the Scotland Island in Northern Sydney do every Christmas Eve.

Residents of this island usually catch a ferry, but for this special date, they do something different with their beloved canines.

This tradition started in 1973 when dogs of two ferry captains swam for hours. Since then, a dog swim race is done annually with the owners either swimming along or rowing beside their dogs.

Last but not the least, South Australia’s Tunarama.

Port Lincoln is known for their big fishes.

However, every December, fishermen compete with each other to find out who can throw tuna weighing 8 to 10 kilos the farthest.

Some of the sports may be a little wacky or weird for other people’s taste. But I guess it just goes to show how fun-loving Australians are.

Any reason to have a celebration is good enough reason to be together with family and friends.