By Marie C in Traveling to the Philippines
February 11, 2016

10 Unique Festivals in the Philippines

Fiesta is the local term for ‘festival’ or ‘feast’. It is something that Filipinos look forward to every year, and something that draws tourists into the country by the droves.

If it’s going to be your first time to travel to the Philippines, there’s no better time to visit than during one of the regional festivals. It’s the perfect way to discover how colourful the Philippine culture really is, and how different we are from all the others.

Although the Philippine culture is, in itself, a mix of different cultures from around the world, it is this fact that makes it even more interesting – for whatever each festival’s roots may be, local flavours have been added to them to make them even more unique, even more Filipino.

Here are 10 of the most unique festivals in the Philippines:

The Sinulog Festival in Cebu City

The Sinulog Festival is the most attended fiesta in the entire country. The term ‘Sinulog’ is a local term that describes the strong current of the Cebu River. This current’s movement is portrayed by the movement of the dancers at the all-day parade. 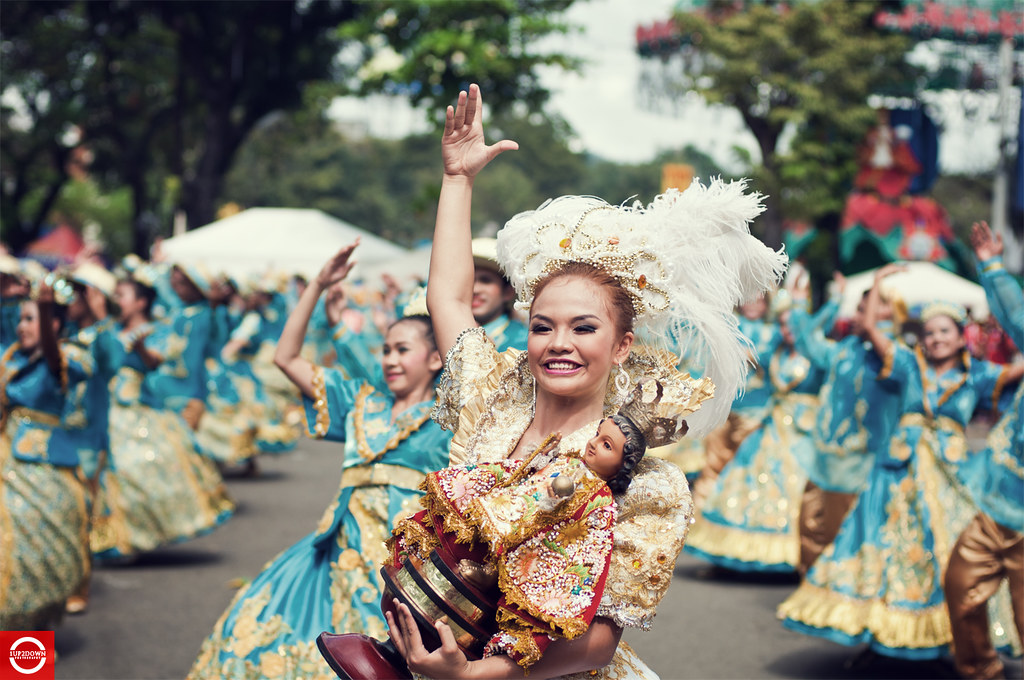 Travel Tip: Since it’s going to be a whole day parade, make sure you secure a good spot with a great view of the street parade really early. If you want to be part of the fluvial parade as well, make sure you check your hotel and see if they have a Fluvial Tour package that you can join.

The Panagbenga Festival in Baguio City

Baguio City is not only known as being the country’s summer capital, it is also known for the flowers that are in full bloom almost year-long. This is owing to the cooler climate that Baguio City has compared to other provinces in Luzon. 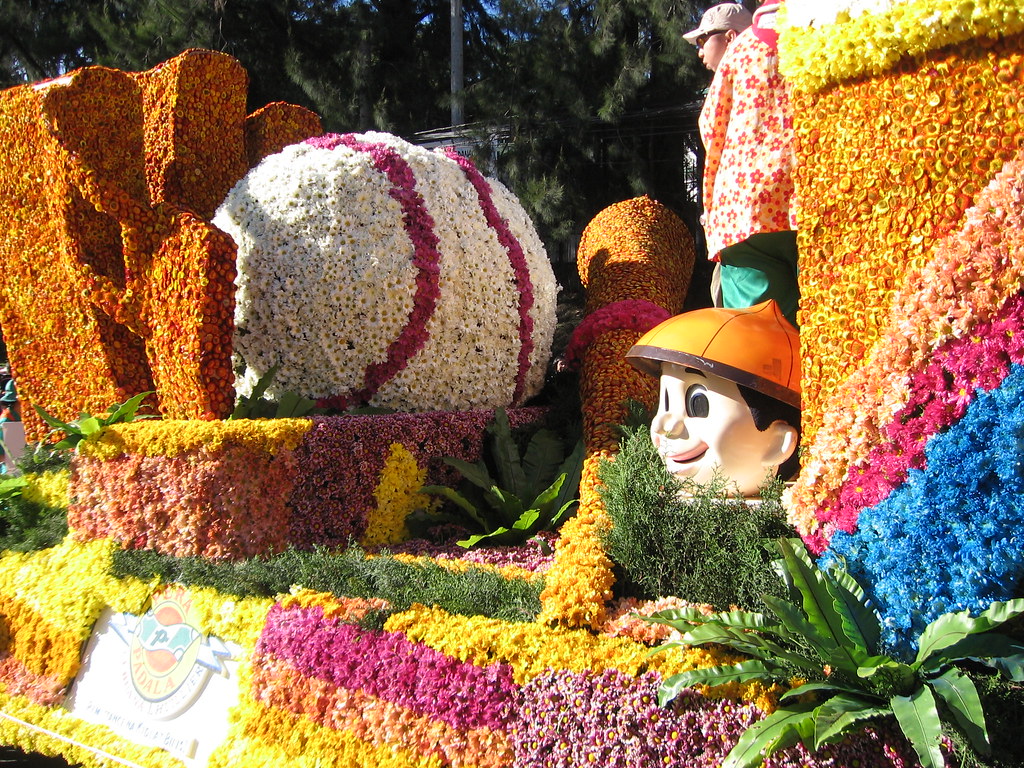 ‘Panagbenga’ means a ‘season for blossoming’, a term from the Kankana-ey dialect of the Cordilleras. It’s a month-long celebration, but people would often schedule their visit around the last Sunday of February because of the annual Flower Float and Street Parade along Session Road.

Travel Tip: The parade usually starts around 8am, so make sure you secure a good spot on Session Road as early as possible if you want to take good pictures of the floats and the dancers. If you’re not interested in seeing the parade, make sure you book your hotel far from Session Road as traffic is terrible around the area especially on parade day itself.

The Ati-Atihan Festival in Kalibo, Aklan

Also in honour of the Santo Niño, Ati-Atihan literally means ‘to be like the Aetas’. It is a cosplay of sorts, seeing that locals (and sometimes, tourists) dress up like the native Atis, smearing charcoal all over their skin to darken it and sometimes wearing wigs to make it seem like they have curly hair. 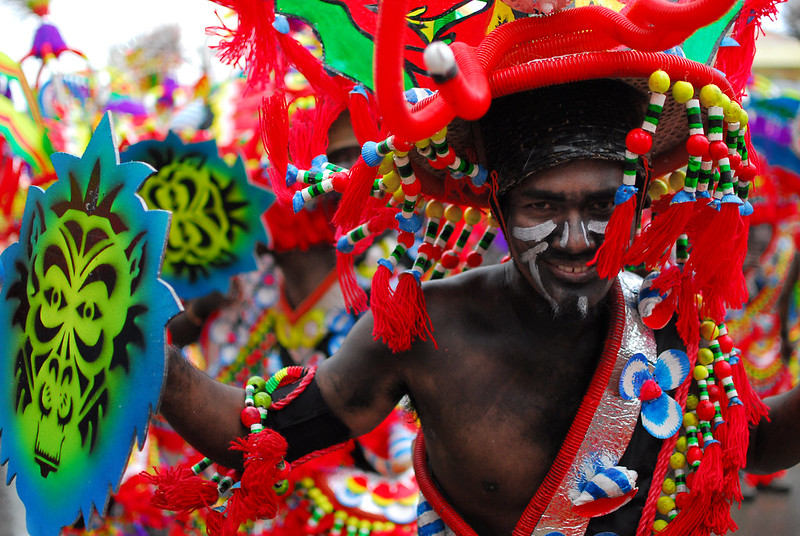 It is considered as the mother of all the Santo Niño festivals all over the country. What makes the Ati-Atihan even more enjoyable is the fact that it is not just an event where visitors can only watch from the sidelines. It upholds the original nature of fiestas, which invites everybody to participate in the fanfare.

Travel Tip: If you really want to fully experience the festival, make sure you prepare for your own Ati look so that you can easily blend in with the performers roaming around town. There is no specific route either, so you can just jump in and join any parade group that you see.

The Pahiyas Festival in Lucban, Quezon

The Pahiyas Festival is celebrated every May 15 and honours the patron saint of farmers, San Isidro Labrador. It is done to show gratitude for an abundant harvest. 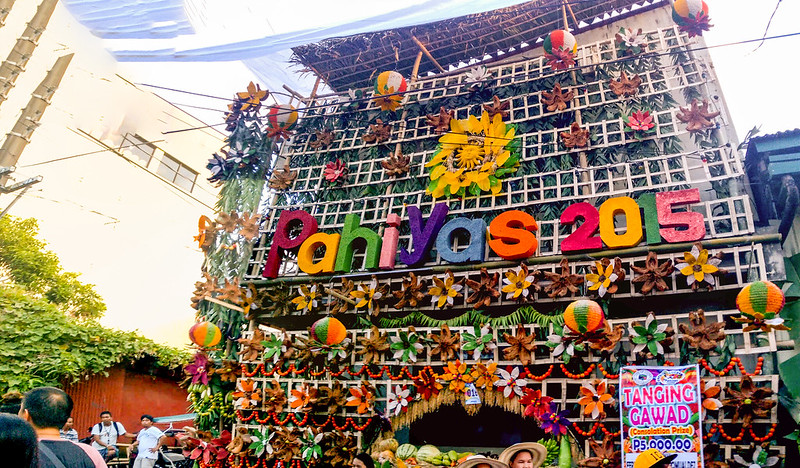 Although there is a procession in the morning, what people come to see is the spectacular view of all the houses along and around the procession route. Every house you see is covered with colourful kiping, thin rice wafers in the shape of leaves. They also display their harvest for people to see.

Travel Tip: Leave Manila as early as 3am so that you can park just around the festival area. It also rains every year during Pahiyas, so make sure you have umbrellas and raincoats ready.

The Masskara Festival in Bacolod

Sugar cane is Bacolod’s primary agricultural crop, so you can just imagine what a huge blow it was when the price of sugar started to drop in the 80’s. This was caused by the influx of sugar substitutes.

Add to that the tragedy of the MV Don Juan, which collided with a tanker at sea and sank, taking 700 lives with it in the process. Some of those who died came from prominent families in Bacolod. Because of the back to back blow, the people of Bacolod knew that they needed a picker-upper. This was when the Masskara festival was born. 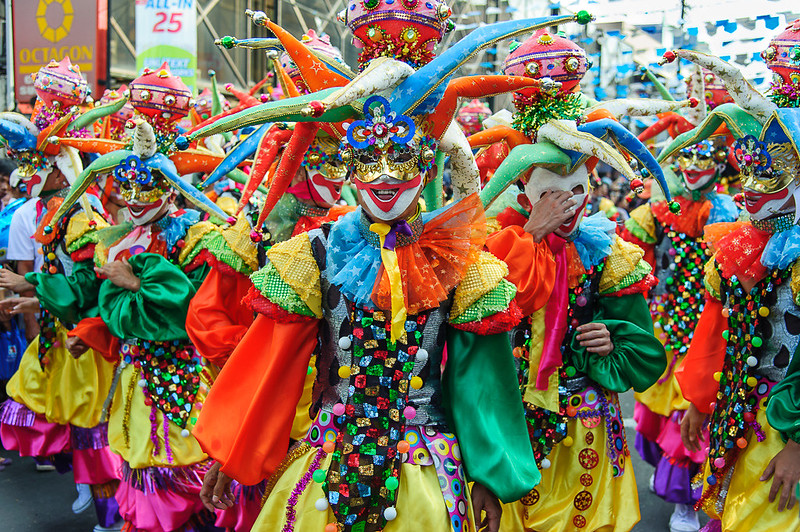 Putting together the words ‘mass’ (a multitude of people) and ‘kara’ (Spanish term that means face), they came up with Masskara, a festival that showed people wearing masks that portrayed smiling faces. There are street parades and street parties throughout the city. It happens during the closest weekend to October 19, and is a sign that the people of Bacolod will always rise no matter what kind of tragedy they encounter.

Travel Tip: Try to book a hotel around Lacson Road so that you can simply walk to where all the parties and parades are.

The Kadayawan Festival in Davao City

Another means of thanksgiving for a bountiful harvest, the Kadayawan Festival celebrates the abundance of fruits, flowers, and farm produce in the region. It happens every 3rd weekend of August and features flower parades, street dancing, and a lot more. 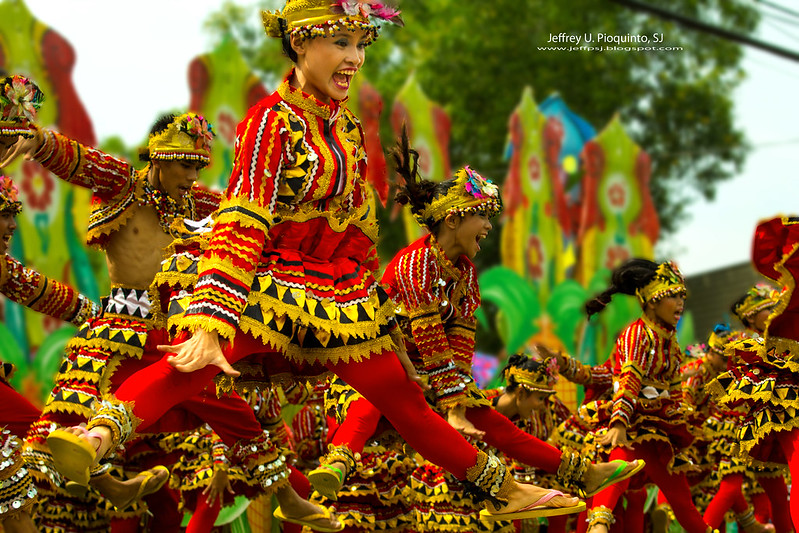 The word comes from ‘Madayaw’, a local term used to describe something valuable, good, or profitable. The Kadayawan Festival is the perfect chance for you to taste fresh fruits, so make sure you prepare your tummy for some yummy, healthy goodness.

Travel Tip: Make sure you travel light as backpacks are not allowed during the festivities. Just bring the essentials, then leave everything else at your hotel.

The Dinagyang Festival in Iloilo

‘Dinagyang’ means ‘merry making’, which perfectly describes everything that goes on during this festival. Another celebration that honours the Santo Niño, it happens on the 4th Sunday of January. 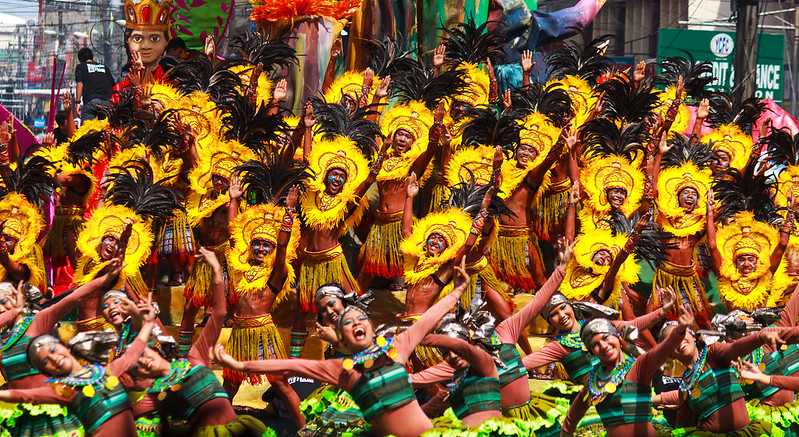 Major roads are closed as you see bands and street parties everywhere. What proves to be the main event during the festival however, is the street dance contest where different small towns and suburbs of Iloilo send their best dancers into town to compete in the all-out dance battle.

Travel Tip: Because streets are closed, might as well walk around the city instead of bringing a car. Make sure you purchase your tickets for the different performances as early as possible as well.

The Moriones Festival in Marinduque

The Moriones Festival is held at the same time that the rest of the country celebrates the Holy Week. The festival is meant to honour St. Longinus, the centurion who drove a spear into Jesus’ side. As he was half-blind, he experienced a miracle when his vision returned after Jesus’ blood touched him. From that moment on, he converted into Christianity. 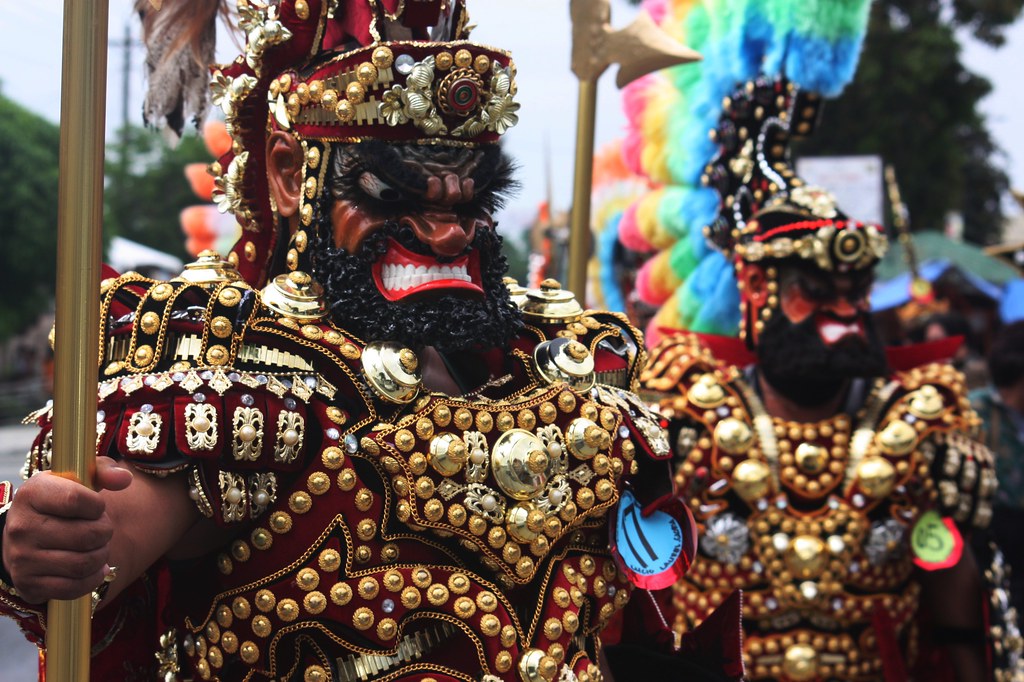 During the week-long festival, people dress up in centurion costumes and wear wooden masks. An individual who plays the role of Longinus roams around town and townspeople invite him inside their homes to hide him as the rest of the centurions try to find him.

Travel Tip: The festival is observed in the municipalities of Gasan, Boac, and Mogpog, so might as well, try to find accommodations there if you want to be smack in the middle of the festivities.

The Higantes Festival in Angono, Rizal

‘Higante’ means ‘giant’, which should give you a general idea of what goes on during the Higantes Festival. It is an annual celebration that features a parade of 12-feet paper-mâché giants that represent the Spanish landlords that the locals worked for centuries ago. 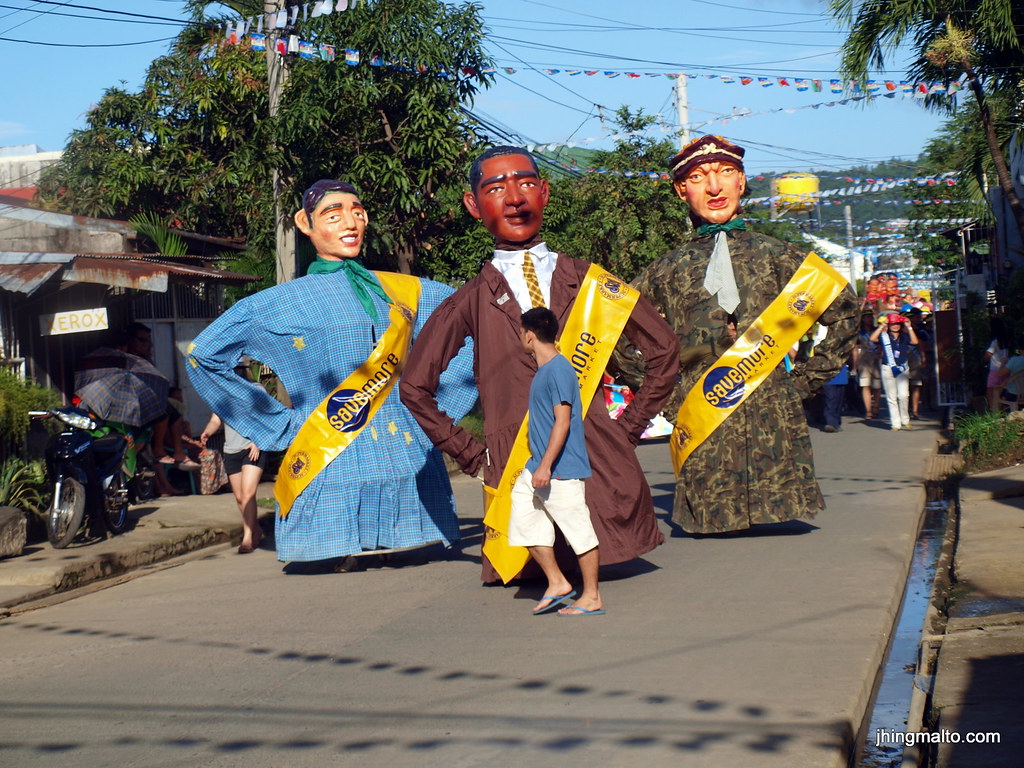 Around 40 giants are paraded around the entire town, and a procession features San Clemente, Angono’s patron saint, is also held. This procession ends in a fluvial parade with the image of the saint placed atop a floating pagoda.

Travel Tip: Be careful if you plan to watch the fluvial parade as it is part of the tradition to squirt unsuspecting onlookers with water.

The ‘Parol’ is a Christmas lantern that San Fernando is known for. In fact, people from all over would flock to San Fernando just to get their lanterns even if it’s a few hours away from Metro Manila. 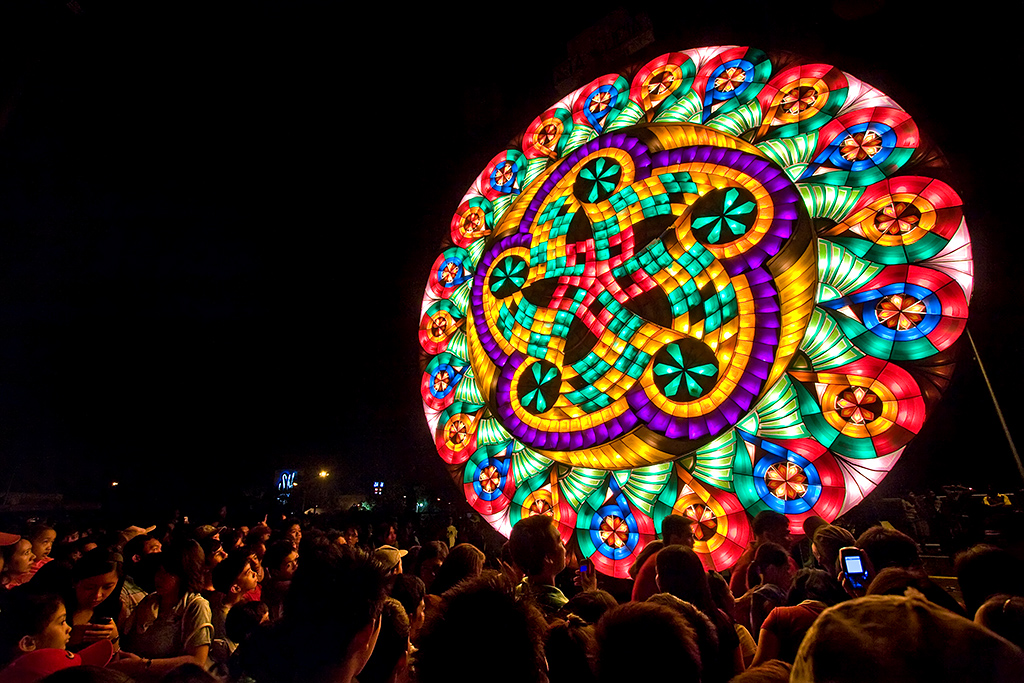 The Filipinos’ love for this Christmas lantern is what makes the Giant Lantern Festival in San Fernando, locally known as Ligligan Parul, a huge hit every Christmas season. Some of the lanterns are as big as 20 feet in diameter, with bright lights strategically placed around and within the lantern to highlight its details.

Held every 2nd Saturday of December, the lanterns in display are made of different materials. Although smaller and traditional parols were usually made of bamboo, these huge lanterns displayed during the festival are now made of steel as this is the best way to support all the weight of the lanterns that become even more impressive and more intricately-made every year.

Travel Tip: You can get VIP tickets way in advance if you want to grab good seats during the competition. It is also better to park your car near the exit and to leave right after the last performance because hanging around longer will get you stuck in the horrendous traffic caused by cars and people from the festivities.

So are you planning to visit the Philippines anytime soon? Might as well schedule it around these festivals so that you can truly experience what the Philippines, its people, and its culture are all about.