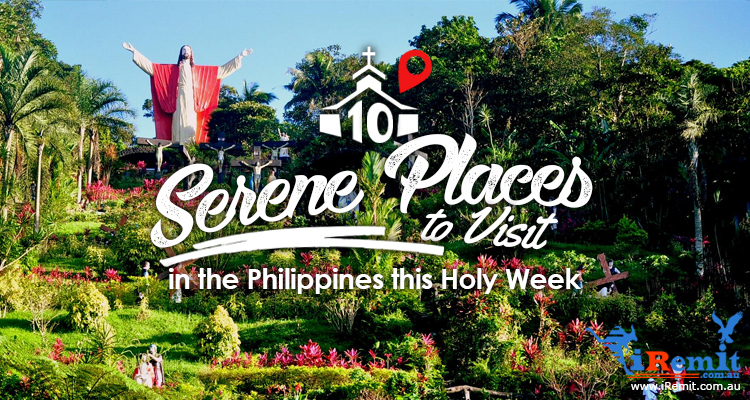 By Candice C in Traveling to the Philippines
March 4, 2016

10 Serene Places to Visit in the Philippines this Holy Week

The Philippines annually observe a week-long Catholic event that remembers the passion and death of Christ, the Lenten Season.

Being predominantly Catholic, Filipinos still practice fasting, Visita Iglesia (visiting 7 different churches), Stations of the Cross and the Pabasa to remember the sacrifices done by Jesus for our salvation.

However, since the Holy Week happens to be one of the longest non-working holiday, people tend to maximize the days. Filipinos try squeeze in some holidaying at nearby hotels, at the beach and other places in between.

Fortunately, there are stunningly beautiful places in the country where you can reflect and relax at the same time. Warning, most of these places require trekking, hiking or climbing several hundreds of steps. Pilgrims to these places vouch that the hike is just a little sacrifice in exchange for a slice of heaven on earth.

The Redeemer’s Cross is one of the highlights of Bani’s mini Calvary hill,  built on a plateau over looking the South China sea. The late Doña Segundina Enriquez Navarro had the cross built saying “Where once the gun ruled, let now the Holy Cross rule.”

Pilgrims can reach Bani after driving 265.9 km from Manila and it would take an almost 5 hours to drive by car. Bani in Pangasinan, north of Luzon, is nestled between famous tourist desitnations, Alaminos and Bolinao.

Mt. Timbak or Mt. Singakalsa is the 3rd highest peak in Luzon resting between Atok and Kabayan in Benguet province. Three white crosses surrounded by a breathtaking view will welcome you as you reach the summit.

Mt. Timbak is considered by the local farmers as sacred ground. Pilgrims are asked to give outmost respect towards the mountain and everything else in the vicinity.

To reach Mt. Timbak from Manila directly by car would take almost 6 hours without traffic.  Or you may get a bus from Manila to Baguio and from Baguio travel around 2 hours more to Atok. 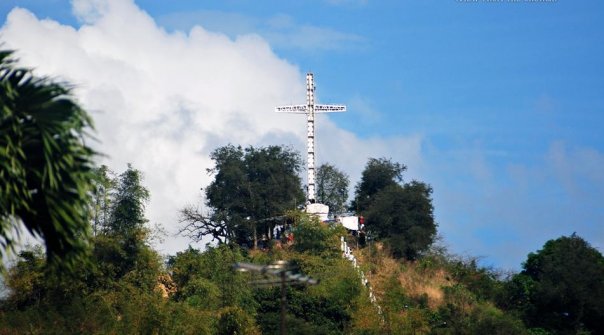 Climbing down from the North of Luzon is a pilgrim site found in Rizal, the Kalbaryo.

Most pilgrims climb 100 steps to see the historic wooden cross after visiting the Antipolo Church and other churches around the province.

Kalbaryo is just 34.7km away from Manila and it takes less than 2 hours to reach without traffic. 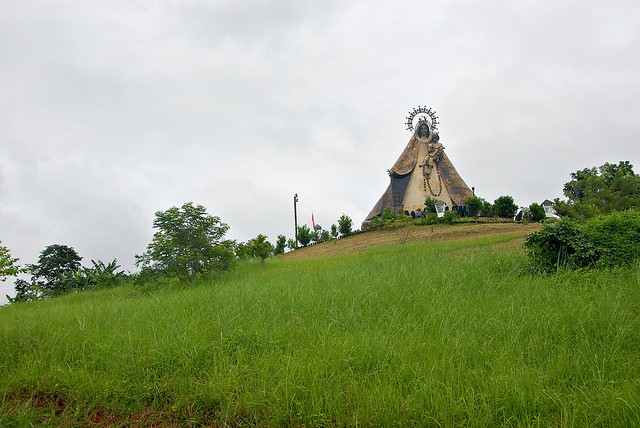 Regina Rosarii or Regina Rica is found on Tanay hills. Dominican Sisters established the pilgrim site on a 13.5 hectare of land envisioning a place for people to visit, pray and contemplate. They also wanted it to be an ecological sanctuary and a wellness place.

At the heart of the institute is the 71ft statue of the Our Lady of Regina Rosarrii. One of the statue’s hand is up lifting the mantel of her clothes and revealing a small room where people can enter to pray.

The Dominican Sisters preserved most of its natural surroundings and enjoys a beautiful garden and even a falls. They also designed the place with statues of different saint, a trail path, shelters and a chapel.

This serene place is just 65.1 km and will take just a little over 2 hours by car without traffic.

A couple of different rides from Tanay is Paete in Laguna. The “Tatlong Krus” or Three Crosses is well known in this part of the country south of Luzon. Perched on top of a hill facing the town of Paete is this tranquil pilgrim site.

Travelling to Paete, Laguna from Manila via the South Luzon Expressway would cost a little over 3 hours. An alternate route can cut the trip almost a little over half the time is through Tanay. However, this route needs several change in transport by commute.

Farther south is the province of Quezon where pilgrims flock to Lucban to visit and climb the famed Kamay ni Hesus.

Set on the foot of the mystical and divine Mt. Banahaw, pilgrims climb stairs and go around to reflect and pray on the images of the Stations of the Cross. At every station, visitors progress until they reach the highest point where a giant image of Jesus welcomes everyone with arms outstretched as if to embrace.

Visiting the green and cool town of Lucban takes less than 3 ½ hours without traffic with only 123.5 km distance to travel from Manila.

The statues depict the Stations of the Cross and are placed around the hills.

The picturesque view of Cebu from this vantage point inspires peace and quiet as visitors are invited to reflect and pray.

The garden is less than an hour away by land from Mactan-Cebu International Airport. Ask locals about the garden or the Good Shepherd’s Road.

Image Credit: Out of Twon Blog

Camiguin Island is a famous tourist destination in the country. Like most provinces around the Philippines, the province has its own program for the holy week. Although, one place stands out, the sunken cemetery.

Continuous earthquakes and volcanic activity from 1948 to 1953 caused the old cemetery to sink under 20ft of water. All the bodies had been exhumed and underneath the water are just the remnants of an old graveyard that has become the home of different water plant and animal species including the giant clams.

Camiguin Island is the second smallest island in the country positioned between Bohol and Northern Mindanao. Direct flights to Camiguin only come from Cebu City which will take less than an hour.

Coming from Manila, take a flight to Cagayan de Oro or Butuan. From Cagayan de Oro ride a shuttle to Agora Market then catch a bus or a van to Balingoan. From there, catch a ferry to Benoni Port. Another alternative is to go to Macabalan Port and catch a fast water craft directly to Camiguin.

On the other hand, coming from Butuan, grab a Cagayan bound bus at the bus station. Go down at Balingoan terminal and walk to the port to ride a ferry to the island.

This statue of the Divine Mercy of Jesus stands 50ft tall and is the biggest sacred statue in all Asia.

The shrine has a schedule of opening for visitors and female visitors are required to wear or bring skirts to be allowed in the premises.

El Salvador is a city in Misamis Oriental found in Mindanao. To see this miraculous place from Manila take a flight to Cagayan de Oro. From Laguindingan Airport travel to El Salvador City.

Another pilgrim site in Mindanao is the 3,003 Step Linabo Peak from Dipolog, Zamboanga del Norte.

Linabo is the highest peak in Dipolog at 486 meters above sea level. Devout Catholics in Dipolog and neighboring towns visit Linabo Peak every Good Friday for the annual “Katkat Sakripisyo.” Pilgrims go up 3003 steps all the way to the summit while watching a re-enactment of Christ passion.

Linabo Peak is found in the outskirts of Dipolog and is 2km away from Dipolog Airport. Local flights from Mamila to Dipolog are available twice a day for 1.5 hours long.

As Filipinos observing the Lenten season, it is still important to keep the week holy by doing activities that will strengthen the faith.