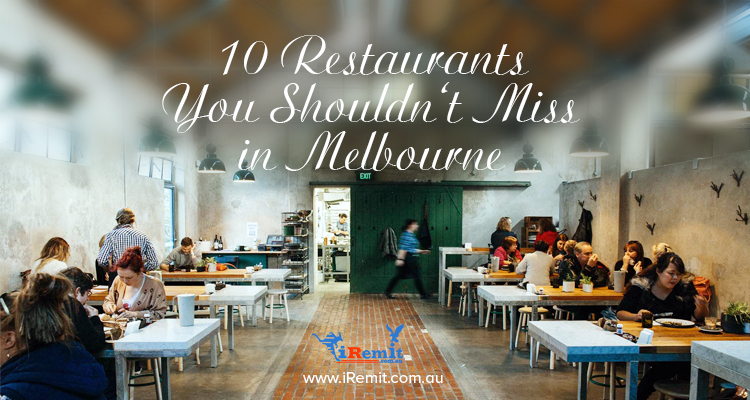 10 Restaurants You Shouldn’t Miss in Melbourne

Lots of people travel for sightseeing. Some also go abroad to shop. (I know of a lady who goes to Dubai just to purchase the latest Louis Vuitton bag so that she’ll be the first to have it in Manila. Wild, I know.) I, on the other hand, am always on the lookout for places to eat.

Ever since the word “foodie” became a hipster way to describe someone who likes to eat (wait, don’t all human beings like to eat?), culinary exploration has taken on a whole new meaning. These days, there are Michelin guides for just about every major country, and it’s a race among “foodies” (ugh, there it is again) to try all of the restaurants on one list before it changes again the following year.

Sydney might be on the 2016 list of Five Foodie Cities to visit, but Melbourne is emerging as a culinary destination in its own right. And since it takes less than twelve (12) hours to get there, Melbourne is a great alternative for Filipino travelers who want to sample world-class cuisine but aren’t keen on spending half the day cooped up in an airplane to do so.

Flying off to Australia soon? Then, you may want to try one (or two, or three) of the following restaurants below to see what Melbourne has to offer:

This café bakery has been described by Time Out as “pretty darn exciting,” as far as breakfast eateries go anyway. Then again, who wouldn’t get excited by the sight of a beautifully crisp Croque Madame for breakfast or a luscious lobster roll that actually won’t break the bank? (Sure, the former is basically a glorified ham and cheese sandwich, but it’s a golden, toasty one that’s topped with the most perfect sunny-side up egg in creation. Yum.)

For those looking for something that’s a tad more exotic, have a go at the Piggery Café’s lamb sanger brioche, which contains a smoky and spicy filling made from the North African lamb delicacy. Set against the backdrop of a high-ceilinged space with rustic concrete walls and earthy marble tabletops, it’s sure to make for an Instagram-worthy breakfast, at least.

A few years back, Manila was crazy about ramen. It seems that Melbourne has followed that trend, judging by Hakata Gensuke’s popularity. Just imagine a bowl full of that cloudy, hot, collagen-rich tonkotsu broth that is Japan’s answer to the proverbial Western chicken soup. Dunk in some firm ramen noodles, a couple translucent slices of chashu pork, chopped cloud-ear mushrooms and piquant spring onions, and you’ve got the real deal at a bargain AUD$13.

Image Credit: MEL: HOT OR NOT

Feeling adventurous? Try asking for the God Fire broth, and see if you make it through to the bottom of a bowl of this notoriously spicy soup.

Another Asian cuisine craze sweeping the world is the xiao long bao (XLB). These little dumplings are deceptively packed with flavor and the hot broth inside their pretty, pleated skins has been burning off the mouths of several uninitiated diners the world over. We might have Din Tai Fung and Tim Ho Wan in Manila for our XLB fixes, and so does Melbourne now, but patrons still flock to the nondescript Hu-Tong Dumpling Bar for the massive mouth-numbing potential of their Szechuan menu.

Not a fan of XLB? Go for Hu-Tong’s steamed prawn har gow (ha kaw) that’s bursting with freshness, or their pan-fried dumplings adorned with a whisper-delicate web of golden-brown pastry dough.

They say pizza is the greatest gift the Italians gave the world (apart from leather shoes, Michelangelo, and okay, maybe the Vespa). That sounds like a stretch, but when you see how the folks at Gradi prepare a classic Margherita pizza, you’ll probably end up being a believer too.

Think discs of pizza dough made with the finest “00” flour and yeast, and then left to ferment for up to 36 hours. The whole lot is then topped with homemade sugo featuring only the ripest San Marzano tomatoes and a bit of salt before it’s stuck into a 400-degree, wood-fired oven.

It then comes out gloriously puffy with golden-yellow crispy blisters dotted all over its pillowy soft interiors. Heaped with just the right amount of San Marzano sugo and sweet, fatty Parma ham, it’s as addictive as they come. You hungry yet?

If you find yourself jonesing for a Jollibee Yumburger while on vacation in Melbourne, fret not. The first Jollibee branches might not open in Australia until 2017, but you can make your way to 1090 Burger for the meantime.

This food truck-turned-eatery has one notable specialty: the Thunderburger. Loaded with a double serving of ground beef, bacon, chili mayonnaise, gooey melting cheese, pickles and ketchup, it’s sure to make even our favorite bumblebee mascot drool with longing. Don’t forget to ask for lots of napkins when you grab one of these babies.

Celebrating a big occasion or just keen on splurging on a meal? Head on to Lûmé, a degustation-only restaurant that exclusively serves an 18-course menu. If you’ve always been curious about fine dining, this place is as good as any to start.

The AUD$140 per head might give you pause, but consider that you’re in for three hours of luxuriously dining on perhaps the finest meal of your life. Don’t expect the typical, stuffy sit-down menu with Beluga caviar and toasts either. Lûmé’s young chefs are keen on experimentation, and they aim to keep you in awe as they dish out dishes like stir-fried cow udder “noodles” with crispy corn silk and crab-flavored cream, scallops encased in a fragrant, jamon-scented dashi jelly, and even a tobacco-infused Wizz Fizz and burnt orange Crema Catalana-filled cacao pod dessert that’s worthy of Willy Wonka himself.

You shouldn’t leave Australia without sampling its many seafood delicacies, and Mr. Hobson is one of the best places where you can do that.

Apart from its charming seaside ambience, this seafood restaurant serves up a mean Seafood Tower, which is comprised of Kilpatrick oysters, seared scallops, calamari, grilled baramundi fillets, battered flat head, soft-shell crabs, and pretty much the pick of Neptune’s bounty on this side of the world.

If you prefer something a bit lighter (the Seafood Tower is meant for two people, after all), they have other noteworthy dishes like the Smoked Salmon Carpaccio and the Five-Spice Soft Shell Crab.

Pasta has got to be one of the world’s most comforting foods, and Tipo 00 can certainly satisfy your craving for this famous carbohydrate. Named for that type “00” flour that the most fastidious Italians use to make their pasta, this unpretentious little joint dishes out bowls of homemade pappardelle ribbons coated in wine-braised, tender rabbit meat and hearty rigatoni tubes swimming in an honest-to-goodness spicy tomato sugo.

The best part is, Tipo 00 is open 24/7, so say goodbye to those midnight hunger pangs brought on by watching cooking show reruns.

Minamishima is Melbourne’s answer to that sushi place in the mouthwateringly high-definition documentary “Jiro Loves Sushi.” Koichi Minamishima is in charge of the kitchen, and the omakase menu belies all the learnings and skills that he got from all the years he spent climbing up the ranks from dishwasher to sushi master.

The 16-course menu sets you back a cool AUD$150, but it also gets you a ringside seat right in front of the master himself as he and his deputy deftly palming mounds of vinegared rice with the most sublime seafood out there. Buttery flounder fin, ginger and soy-kissed Japanese cockle, and of course, the fatty tuna o-toro are just a few of the things you can expect from the tasting menu when you sit down for a meal here.

Of course, this list wouldn’t be complete without a reference to a good Filipino restaurant. Besides, you would need some place to retreat to (i.e., eat a rice meal at) after you’ve had all those burgers, pizzas, and degustations.

There really isn’t anything fancy at GJ’s Grill; it’s just old favorites done properly. But anyone who’s ever lived or gone abroad and been seized with a sudden craving for good ol’ grilled liempo or pork belly on top of steaming white rice and a spoonful or two of homemade atchara (picked radish) knows how difficult it can be to find such. And at GJ’s, that is precisely the kind of food that they serve.