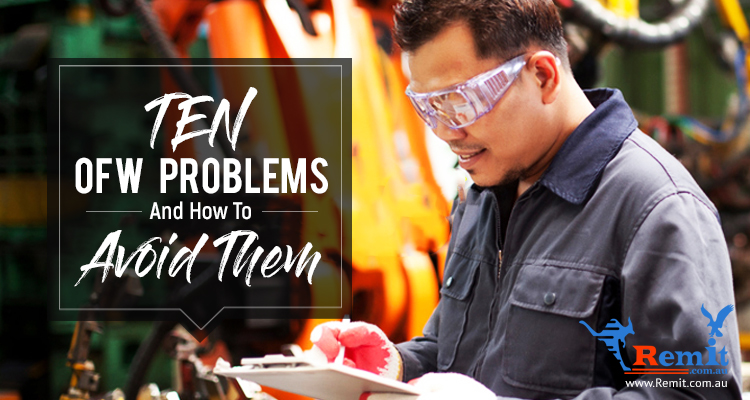 By Serena Estrella in Filipinos in Australia
April 13, 2018

10 OFW Problems and How to Avoid Them

With all the work that goes into applying for work or student visa’s, you’d think that the worst would be over once you have all your documents and have made it safely over on to the other side.

Sadly, that’s not always the case. For every overseas Filipino worker (OFW) that has prospered abroad, there are quite a few that make it onto the nightly news for all the wrong reasons. Some end up getting wrongfully imprisoned, a lot get scammed, and sadly, there are also those who end up coming home in a wooden box.

So, it’s a testament to the Filipinos’ desire for a better life for themselves and their families that many of them still choose to soldier on despite such odds. If you are considering going down this path, do take caution when it comes to the typical pitfalls that come with the job:

So before you sign on the dotted line, be sure to check if the agency you’re partnering with is certified by the Philippine Overseas Employment Administration (POEA). It also helps to ask seasoned OFW’s about their own experiences with various recruitment firms so you can make an informed decision.

Recruitment agencies typically charge for their assistance in processing your requirements and helping you find jobs abroad, but if their fees seem exorbitantly high, you could end up in debt long before you’ve left the country and perhaps even after you’ve returned from a 24-month contract.

Some of these scammers even try to make such an arrangement seemingly more palatable by offering to let you pay with installments, but why would you want to authorize someone to make automatic deductions from your paycheck?

As with the first item, be sure to read the fine print and to canvas for reasonable rates with other recruitment agencies before committing to anything.

Remember what we said about unscrupulous employers in the first item?

Abuse takes many forms. Some of the most notorious cases involved employers murdering their staff or inflicting physical torture on them, but there are also several instances where an OFW may be subjected to less obvious yet equally insidious forms of ill treatment. Constant verbal bashing, withholding pay, confiscating your passport, and disparaging your race and/or gender all still count as abuse.

There aren’t a lot of ways to determine what sort of employer your boss will turn out to be up front, but be sure to locate where your local embassy is and know who you should turn to in case you find yourself in any of the situations mentioned above.

Whenever the AUD-PHP rate falls, many of our customers often react with dismay, and with good reason.

Unless you are the President of a country (and if you were, you’re not likely to be an OFW now, are you?), fluctuating exchange rates are out of your control, but they can still be a cause of great frustration. No one likes it when their money is suddenly worth less upon conversion, and it’s especially inconvenient if the rate drops at a crucial time, such as during the enrollment season.

It’s hard to predict when you’ll get a favorable rate, but you can create a buffer for extreme fluctuations by building up an emergency fund and learning how to invest in different asset classes. Having your family back home put up a business on the side like a sari-sari store also creates an additional income stream to boost the household coffers.

5. Mishandling of Family Finances Back Home.

Speaking of business on the side, that option will only work out if it’s managed well.

The trouble with some OFW families is that they can sometimes grow too dependent on their breadwinner’s periodic remittances. Waiting around for money to come in is much easier than hustling or working hard on other income sources, but that’s not an excuse for dependents to slack off, or worse, blow the money on frivolous expenses like the latest gadgets or frequent vacations.

Not only can such irresponsibility nullify an OFW’s years of hard work, but it can also cause rifts between family members. Fortunately, you can avoid this scenario by having a serious conversation about finances and how you expect your dependents to budget their money while you’re not around. You can also set up an online banking account so you can check if your remittances have already cleared (and to monitor your family’s expenditures as well).

Lastly, don’t forget to emphasize that the goal is not for you to be an OFW for life, but for the family to save and invest enough so you can return to them one day and enjoy the fruits of your labor.

6. Lack of Support from Embassy or Consular Officials.

This isn’t a common occurrence, thankfully, but it can still happen if you’re posted to a remote location where there aren’t a lot of Filipinos. The reverse can also be true: there might be so many OFW’s in one country that the embassy or consul’s manpower is insufficient to provide everyone with proper assistance.

How do you avoid this? For starters, choose your job postings carefully. Be sure to double-check where you will be posted so you can find out where the nearest embassy is and how well they’re serving Filipinos in the area, if any. If a certain country doesn’t seem to have an active consul or embassy, you’re better off passing on their job offer.

High-paying postings are all well and good, but you’ll need the backing of the embassy in the event of the two following situations.

7. Wrongful Incarceration (AKA Being Jailed for Crimes You Didn’t Commit).

Apart from getting killed by your employer, ending up in prison while abroad is possibly the worst case scenario for OFW’s. It’s even worse if you get apprehended for someone else’s crime.

There’s a long list of OFW families seeking government intervention for their loved ones imprisoned abroad. Make sure yours doesn’t end up on it by steering clear of dubious company and by avoiding any suspicious transactions even if they’re proposed by your fellow OFW’s. Read up on the laws of your host country and abide by them at all times too.

If you ever needed another reason for building a stable savings account and creating a profitable investment, this would be it.

Now, Australia’s a relatively stable country, but there’s no predicting earthquakes, terrorist attacks, or, well, xenophobic (i.e., those who can’t stand migrants) people coming into power, so it always helps to have a back-up plan in case you’re forced to go back home a lot sooner than expected.

For some, the loneliness of living and working abroad by themselves can drive them into the arms of another….despite a spouse and children waiting for them back home. There are also a few instances where some migrants get into illicit relationships for money or for the convenience of expediting their visas. Either way, it’s the OFW’s family that ends up paying the price for such indiscretions.

If you still want a family to come back to when your contract is up, be proactive. Should you feel yourself getting too attached to someone else, put some distance between yourself and them until such feelings wane.

Lastly, have constant and meaningful conversations with your spouse and kids. With free communication apps like Skype, Viber, or Telegram, this shouldn’t be too difficult.

Children getting hooked on drugs. Parents receiving a grim medical diagnosis. Spouses running off with other parties. Any of these can easily send an OFW on the next flight back home.

Life can throw some pretty wicked curve balls. You can avoid some, but there are those that you simply won’t see coming. Emergency funds and a strong financial foundation should be a given and are a big help in such situations, but don’t neglect cultivating your emotional support systems either, whether it’s a support group of fellow OFW’s or your own faith.

This article is not meant to discourage you from pursuing a career abroad. Being an OFW remains a noble profession; who else can keep working through brutally long hours, illness, and the constant feeling of missing home? In a perfect world, anyone who manages to do that for decades should be guaranteed security and comfort once it’s time to head back to the mother country.

Yet as the world we live in is far from ideal, it also helps to go into things with both eyes open. So, before you take the leap into seeking greener pastures, have a game plan to make sure that whatever price you have to pay will never outweigh the benefits they’re supposed to bring you and your beloved family.