By Serena Estrella in Filipinos in Australia
May 25, 2016

10 Kinds of Filipino Food Your Aussie Spouse Will Love….Or Hate

“A Filipino may denationalize himself, but not his stomach,” so begins Carmen Guerrero-Nakpil’s essay called “Where is the Patis?”

Truly, Filipinos may migrate to anywhere in the globe, acquire a certain accent in speaking English or whatever language their adoptive country favors, and perhaps even marry a foreigner, but they can never quite shake off craving their native cuisine.

For Filipino expats married to Aussie nationals, there’s an additional challenge in getting their spouses to try Filipino food. If your Aussie spouse has never had Filipino food before, it’s important that you serve him or her the right dish so that s/he will have a positive first impression and thus be more willing to try new dishes in the future.

Thus, the following are just a handful of popular Filipino dishes that you can choose from to initiate your spouse’s palette, and how s/he might love or hate it.

What is it? Perhaps the most famous Filipino dish (a lawmaker once filed a bill to declare it the national dish of the Philippines), adobo is basically a stew made with pork or chicken pieces marinated in a mixture of soy sauce and vinegar.

This dish has been around for so long that just about every Filipino mother-in-law has their own special adobo recipe. It’s also currently the darling of the upscale dining scene in New York, where variations on the national favorite include the addition of other exotic ingredients like coconut milk and fiery Thai chili peppers. 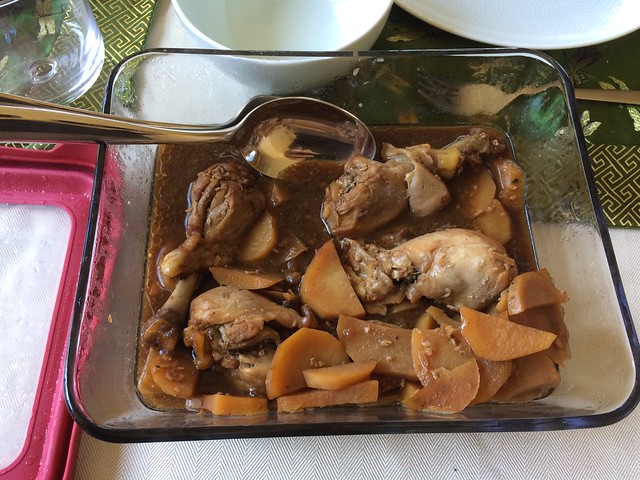 Why Your Aussie Spouse Will Love It: Since adobo is traditionally simmered on low to medium heat for quite a long time, the meat pieces become incredibly tender. The lengthy cooking time also lets the marinade permeate deep into the meaty pieces, resulting in a rich, savory flavor. If your spouse is already used to eating rice with meaty viands, they will surely love adobo.

Why Your Aussie Spouse Might Hate It: On the other hand, since adobo has a lot of strong flavors, a spouse who is used to gentler flavors might balk at trying it. If your spouse falls into this category, you may want to dial back on the spices and seasonings in preparing your first batch of this savory stew.

What is it? The fresh version of this local dish involves a filling of meat, lettuce, carrots, and chopped-up peanuts rolled up in a sheet of rice paper. Fresh lumpia is usually dipped into either garlicky vinegar or a sweet, brown sauce and eaten like a big burrito. 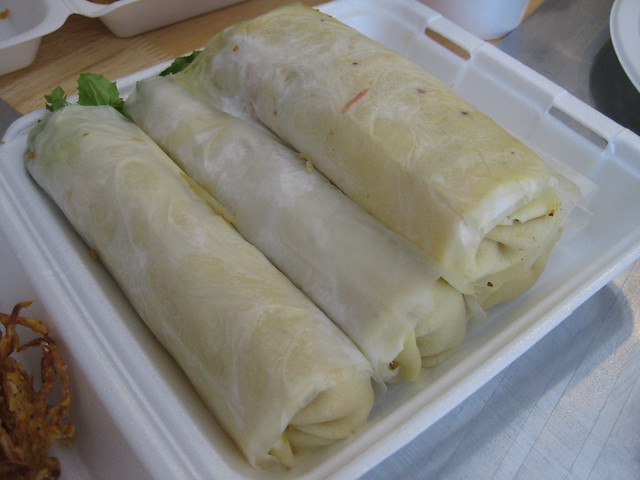 Why Your Aussie Spouse Will Love It: Each mouthful of fresh lumpia is a revelation of textures and flavors. The crunch from the fresh vegetables and the peanuts, the springiness of the cooked meat, and the sweet-saltiness of the seasonings all prove to be an addictive combination.

Why Your Aussie Spouse Might Hate It: The rice paper that this mixture is rolled up in can be an acquired taste for some, and it can be quite tricky to get the ideal wrapper to filling ratio in one bite. If the raw lumpia wrapping is putting off your spouse, you can try deep-frying the spring rolls in oil to crisp it up prior to serving.

What is it? Kinilaw is named for the Filipino word “kilaw,” which means “eaten fresh,” so this dish is comprised of slices of raw fish steeped in vinegar and acidic citrus juices, particularly calamansi. Once the raw fish slices are “cooked” by the acidic marinade, other ingredients like ginger, onion, garlic, and chili peppers are added to complete the dish. 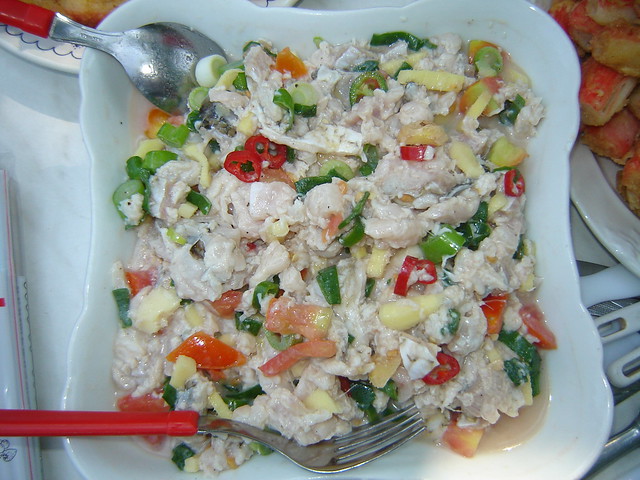 Why Your Aussie Spouse Will Love It: Any spouse who likes raw fish dishes like sashimi or ceviche will love the tangy kick in each bite of kinilaw.

Why Your Aussie Spouse Might Hate It: Conversely, if your spouse is disgusted by the idea of eating raw food, you might want to move on to the next dish on this list.

What is it? Another Filipino classic, this oxtail and tripe stew gets its mellow yellow color from the addition of annatto seeds and peanut butter. Like adobo, it’s best eaten with heaps of steaming white rice and perhaps a tablespoon of briny shrimp paste or bagoong on the side. 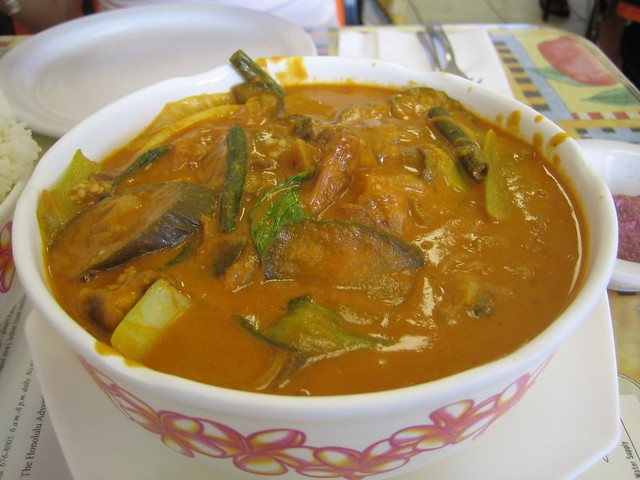 Why Your Aussie Spouse Will Love It: Kare-kare is a dish that’s best reserved for more adventurous eaters, but if you are such, then eating it can be a rewarding experience. Spoonfuls of kare-kare are chock-full of nutty, umami goodness that is further highlighted by a dab of salty shrimp paste.

The stewed oxtail in the dish is also meltingly tender, and many Filipinos equally enjoy the pleasantly rubbery texture of the accompanying boiled tripe. Aussie spouses who live for new tastes and flavors will definitely enjoy this Filipino take on comfort food.

Why Your Aussie Spouse Might Hate It: One caveat to this dish is that it has a lot of allergens, so if your spouse has a deathly allergy to peanuts and/or fish, it would be best to steer clear of this one.

Also, the tripe’s towel-like texture (locals don’t refer to it as “tuwalya” or “towel” for nothing) may discourage Aussies who aren’t used to it.

What is it? Leche flan is much like your typical custard or creme caramel made with eggs, sugar, milk or cream, and the occasional drop of vanilla extract. The only difference is that it has a thicker texture and mouthfeel since condensed milk is used to make it. 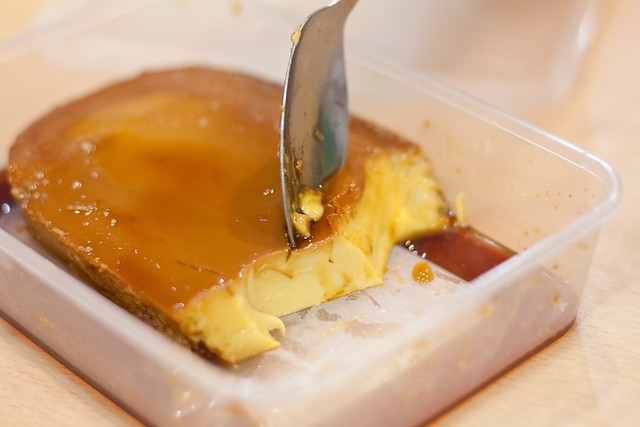 Why Your Aussie Spouse Will Love It: It’s thick, creamy custard. What’s not to like?

Why Your Aussie Spouse Might Hate It: Let’s rephrase the previous statement: It’s thick, creamy custard. What’s not to like?

What is it? Had it not been for Fear Factor, much of the Western world would not be acquainted with this notorious Filipino street food.

Take a duck egg that’s intentionally left unpasteurized, left to develop a fertilized embryo, and then hard-boiled till cooked at the 17-day mark, and you’ve got balut. Often sold at night by street vendors, balut is traditionally sprinkled with salt and vinegar before diners slurp up the broth inside the egg and devour the prematurely-formed duckling within. 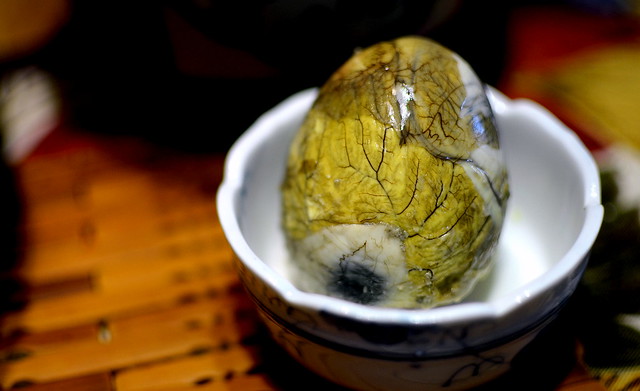 Why Your Aussie Spouse Will Love It: Somewhat terrifying mental images aside, a warm piece of balut is actually quite comforting and delightful to eat. The warm broth inside the shell tastes like fortified chicken broth and has a restorative effect. A bite of the cooked duck embryo has a savory creaminess that is vaguely reminiscent of foie gras, never mind the occasional crunch from the tiny bird beak and/or feathers.

Why Your Aussie Spouse Might Hate It: Let’s face it, while it might taste like gourmet food, balut is neither a pretty nor appetizing sight for the uninitiated. It would take a strong stomach to get past the sight of a half-formed duck embryo peeking out from an eggshell.

What is it? Slices of chicken, cabbage, celery, and carrots are tossed with cooked strands of vermicelli noodles and seasoned with spoonfuls of soy sauce. Squeeze a couple pieces of sliced calamansi over it, and you’ve got a plate of the classic pancit bihon. 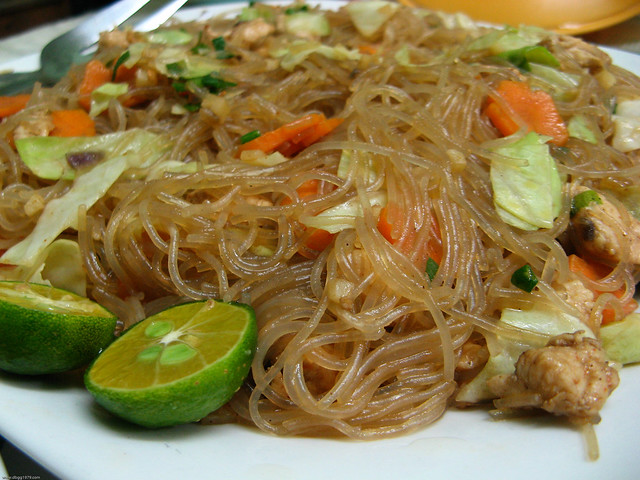 Why Your Aussie Spouse Will Love It: Unlike many pasta dishes out there, this Filipino noodle dish is both hearty and light. The vegetables used in this dish also retain their textures throughout the cooking process, so you get delightful contrasting textures in every bite. A squeeze of calamansi juice also adds zest to this otherwise salty dish, making all the easier to consume it by the forkful.

Why Your Aussie Spouse Might Hate It: Unlike other noodle dishes that your spouse may be used to, pancit bihon tends to be on the drier side. If your spouse likes his or her noodles coated in sauce, you might want to make a wetter version of this dish or cook up some vermicelli soup instead.

What is it? While adobo might be the declared national favorite, sinigang could well be considered its rival for that title. Like adobo, sinigang is a mostly sour dish made with a certain kind of protein, with pork, beef, or shrimp being the most common choices. The difference is that sinigang is more of a soup than a stew, and that fruits such as guava or tamarind are used as souring agents. 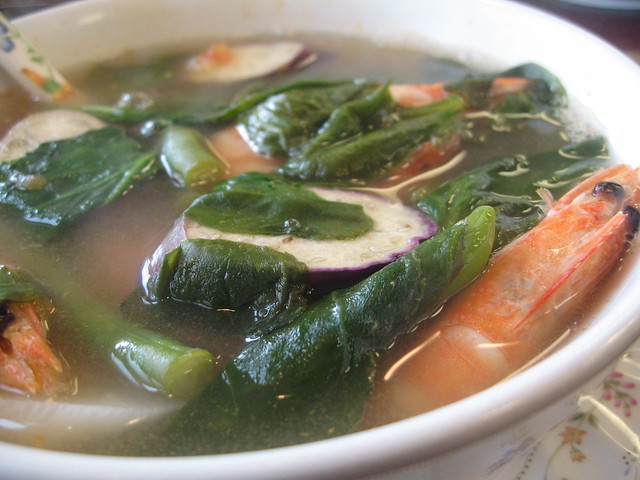 Why Your Aussie Spouse Will Love It: The gentle tang of this soup is reminiscent of the Chinese hot and sour soup, and the presence of meat and vegetables in it makes it a complete meal in a bowl. And because it can be made with just about any kind of protein out there, you’re unlikely to get sick of it because of the sheer number of variations.

Why Your Aussie Spouse Might Hate It: As with leche flan, this is one Filipino dish that’s hard to hate. Served piping hot, few things are as comforting as a hearty bowl of sinigang.

What is it? The words “halo-halo” are Filipino words for “mixed,” and that’s precisely what this dessert is. A mound of finely-shaved ice is topped with all sorts of yummy goodies like sweetened chickpeas or garbanzos, tapioca, sugar palm fruit or kaong, purple yam or ube paste, jackfruit slices, and perhaps even a scoop of ice cream. To finish, evaporated milk is poured over the lot. 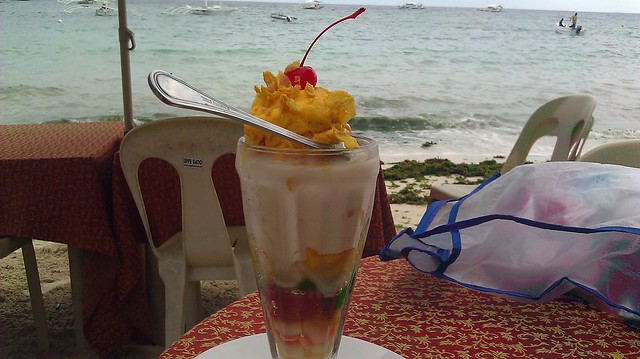 Why Your Aussie Spouse Will Love It: It’s essentially a Filipino summer in a glass. Not only can this dessert cool you down on the hottest day of the Australian summer, but it also showcases some of the best raw produce from the Philippines. Each component of the classic halo-halo was added to either add to the taste or the texture of this dessert and once you’ve mixed it up perfectly, you are golden.

Why Your Aussie Spouse Might Hate It: Some parts of the halo-halo might be a little weird for the first time eater, such as the sweetened chickpeas or the somewhat chewy jackfruit slices. Yet the best thing about the halo-halo is that you can actually pick which ingredients you like and leave out the ones you don’t and thus build your own version.

What is it? Dinuguan is basically the Filipino version of blood sausage, except that’s it’s in a stew form. Bits of pork offal such as the lungs, kidney, and intestines are cooked in a dark, almost black gravy made with pig’s blood, vinegar, garlic, and a chili pepper or two. 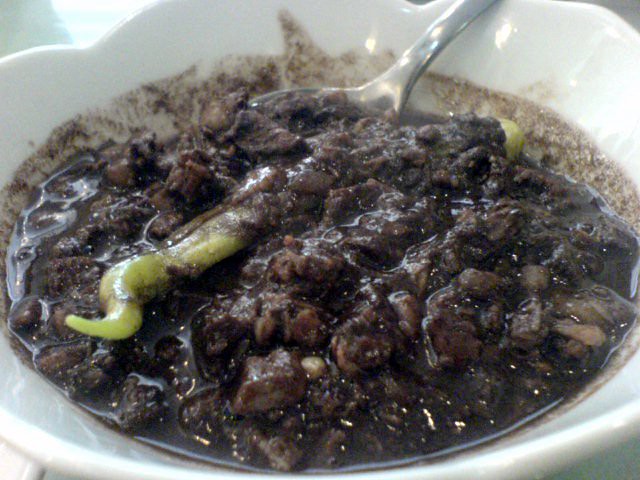 Why Your Aussie Spouse Will Love It: This pig’s blood stew has a rich, full-bodied flavor that’s very similar to the sort of blood sausages that often end up in a typical English breakfast, which is a big plus if your spouse likes or is familiar with the latter.

Why Your Aussie Spouse Might Hate It: It smells weird. Congealed pork blood has a rather unpleasant odor, and your spouse might not be too keen about the idea of eating pig offal.