By Serena Estrella in Home and Family
December 1, 2016

10 Dishes That OFW’s Miss During the Christmas Season

Ah, Christmas is indeed in the air! Here in the Philippines, at least. As we go into the last week of November, the holiday carols sound all the cheerier, the mall displays get brighter, and is that a long line of your godchildren (inaanak) waiting for their Christmas money from Ninong or Ninang?

Kidding aside, Christmas has always been a big production in the Philippines. We like attending nine days of Dawn Masses even if it means getting up an hour or two earlier, and then going straight to work afterwards. We play Christmas songs as early as September, and the traffic situation in the metro becomes more intense during the later “ber” months as the annual round of holiday parties begins.

Truly, a Filipino Christmas is arguably among the most festive holidays on Earth, and it’s one of the many things that an OFW gets terribly homesick for during their first year abroad. That longing is made all the more significant by strong cravings for certain kinds of food that are crucial to any Filipino’s Noche Buena, such as:

These cylindrical, dark purple rice cakes became linked with the Christmas season after some enterprising vendors served them up to hungry churchgoers coming out of Dawn Mass. 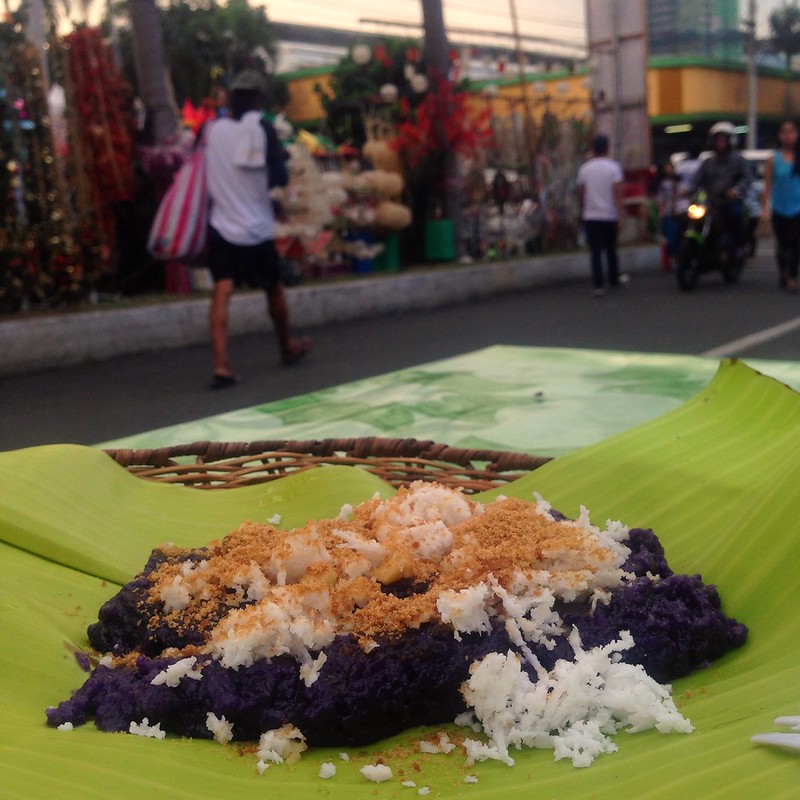 They get their shape and their name from the bamboo cannon vessels (called “bumbong” in Tagalog) used to steam the rice cake batter into soft, sticky perfection.

On its own, puto bumbong is slightly bland, but a smearing of butter and a few spoonfuls of dried coconut flakes and brown sugar are all it takes to make every mouthful a delight.

Like puto bumbong, bibingka is a Christmas dish with origins in the Dawn Mass tradition. Rice flour is combined with coconut milk, eggs, and sometimes mochi flour, and then poured into a terra cotta pot lined with banana leaves. 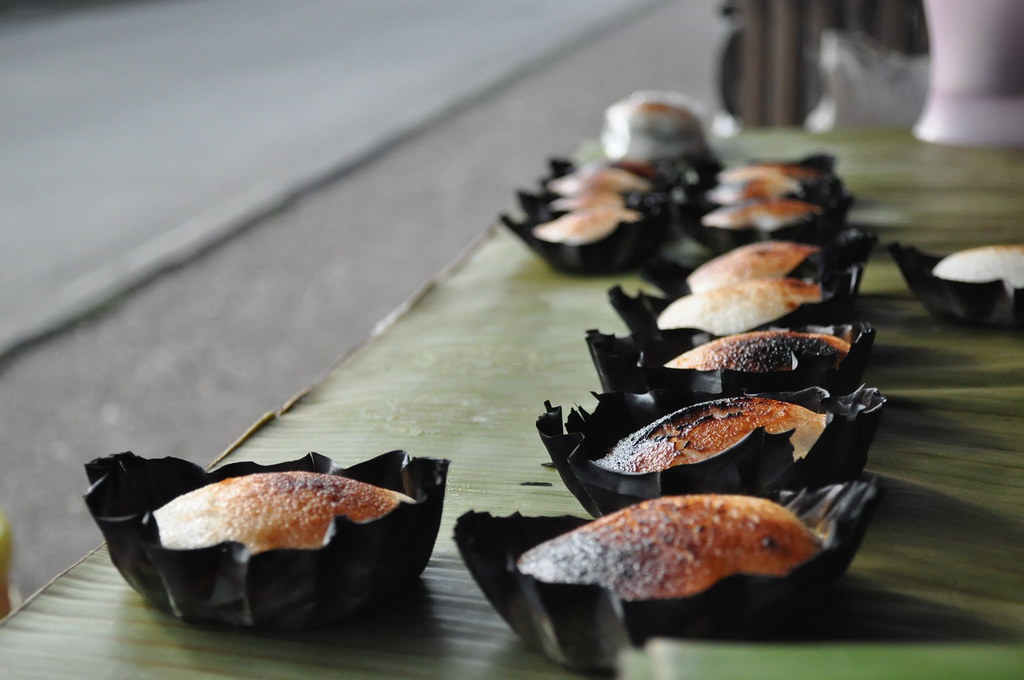 The batter is cooked over coals, resulting in a soft and spongy center and a charred, crispy top layer.

When eaten warm, it is slightly sweet but oh-so-comforting, with a texture that’s akin to a mellow rice pudding.

Imagine an entire pig stuffed with herbs and spices, glistening with oil as it rotates on a big stick over a fire. 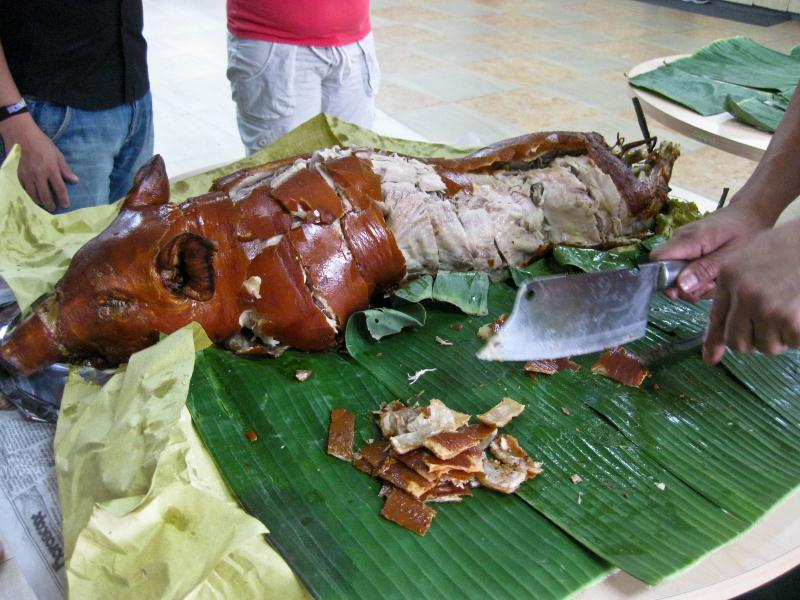 Are you salivating yet? Now, try to picture that crispy, golden brown skin crackling to reveal the layers of plump, juicy fat and meat underneath it. Some diners like to ladle tart-sweet lechon sauce over a serving of the roasted pig, but if you’re eating the best kind, you won’t even reach for that gravy boat.

The fancy jamon serrano might be the toast of the gourmet world, but Filipinos will always have a soft spot for the tender, ball-shaped ham covered in a fruity glaze. 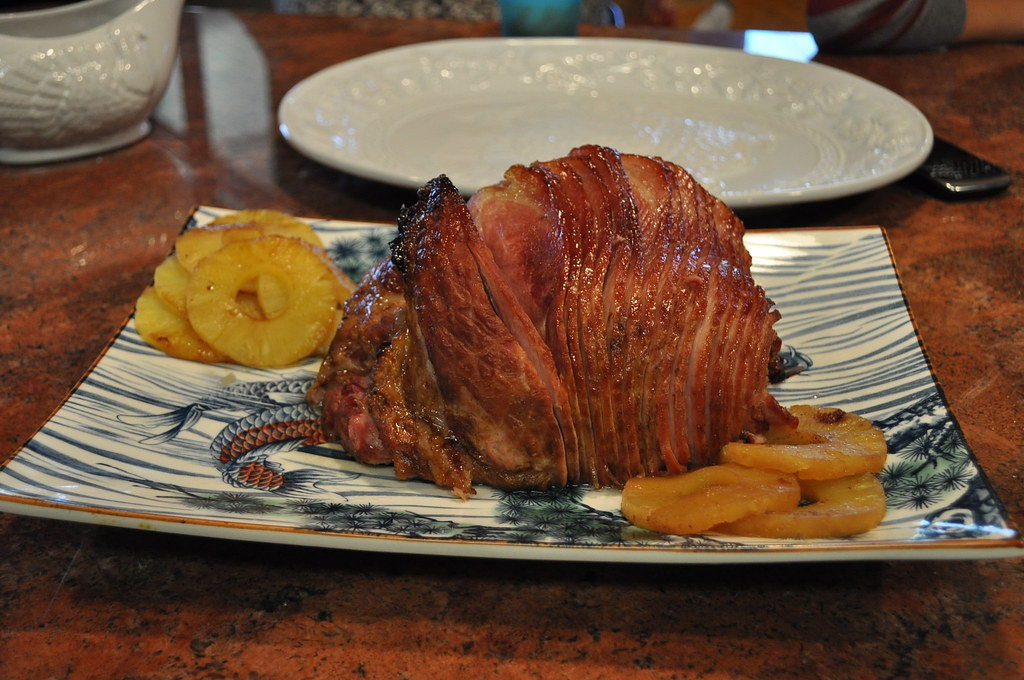 Cooked in a sweet broth after curing, the Filipino Christmas ham is then scored, roasted, and glazed before it’s placed in a boxy packaging. As a centerpiece, it’s simply exquisite: a glimmering ball of sweet, succulent porky goodness that’s good enough to be eaten on its own or sliced up and served between toasted slices of pan de sal. Yum..

Proving that our country has a penchant for round-shaped food (superstition tells us that they are harbingers of prosperity), our favorite holiday cheese takes the guise of a nearly odorless ball of the stuff dipped in bright red paraffin wax. 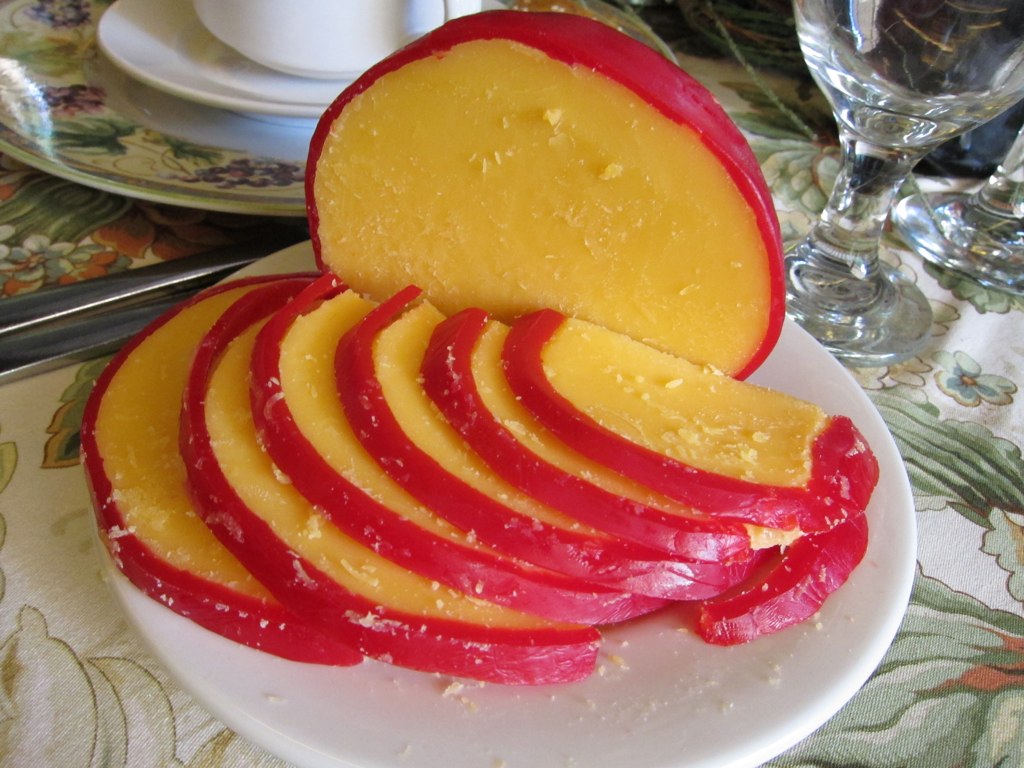 This hard and chalky cheese has a salty and mildly nutty flavor, and is often eaten with crackers and honey or as part of the Christmas ham sandwich mentioned above. As an added bonus, Queso de Bola doesn’t spoil; it just dries up and hardens over time so you don’t have to worry about it stinking up your fridge.

If you’ve ever despaired at getting your kids to eat vegetables, a chicken galantina is a great option. 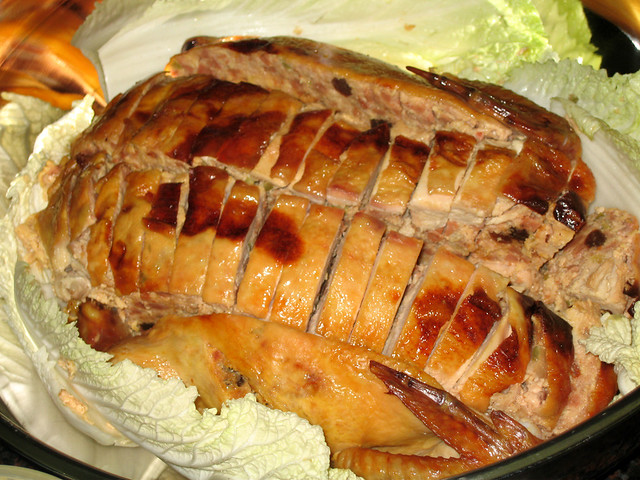 While it’s so tedious to make (you need to remove the bones and insides of the bird without breaking the skin), this poultry dish that’s stuffed with minced chicken meat and chopped ham, hard boiled eggs, bell peppers, and carrots is quite delicious, especially when served cold.

Think of it as a festive meatloaf. The embutido is a delightful mix of savory and sweet with a stuffing mixture that contains minced meat and vegetables as well as raisins. It’s usually rolled up in aluminum foil and then steamed before being sliced up for dinner.

Now, you might be thinking, “Hang on, we have hot chocolate in Australia too. Why would Filipinos miss it here?” Well, our version of the well-loved drink is quite different from its Western counterpart.

For starters, traditional hot chocolate or tsokolateng tablea is made not with cocoa powder, but with small tablets of solid cacao chocolate (hence the name “tablea”). Since the manufacturing process for cocoa powder strips the cacao of most of its cocoa butter, these unprocessed chunks give you a far creamier and more flavorful beverage after they’ve been melted in some hot milk. 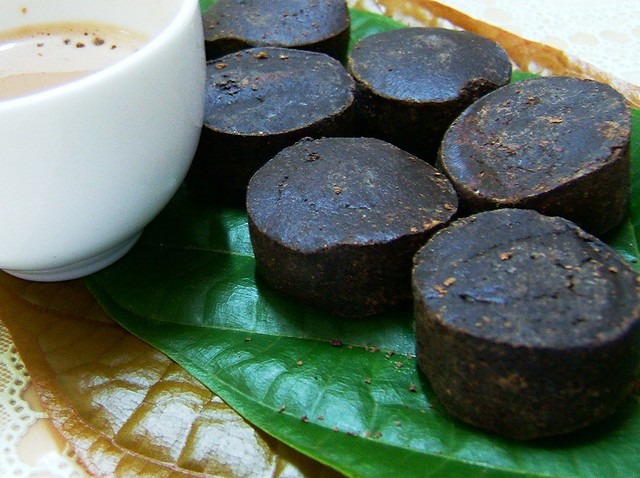 The drink has been iconic for so long that our national hero even used it as a political metaphor in his 18th century novel. In “Noli Me Tangere,” friars dispensed cups of thick, creamy Tsokolate Eh (as in espreso, or thick chocolate) to their favorites and allies. Those who did not belong into either category were instead presented with Tsokolate Ah (as in aguado or watery chocolate). Darn, so that’s where cronyism started.

If you’ve seen our article on spicy ginger ointment, you’ll have read about a soothing hot drink called salabat. It’s basically a decoction made by boiling ginger slices in water. The liquid drained out from this procedure is fragrant and spicy, perfect for throats that are sore from a bout of flu (or from singing carols all night). 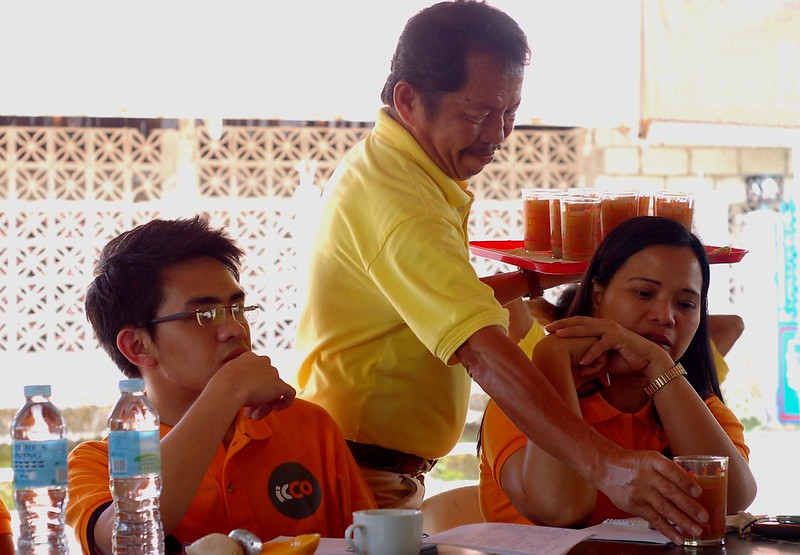 Over the years, however, people have added sweeteners like brown sugar or honey to the brew to make it more palatable. A squeeze of lemon juice also helps, and if you add a bit of cinnamon to the mix, you’ll come up with a nice cuppa that’s great for long, nippy evenings.

The morning after the Noche Buena feast often yields delicious leftovers, and we like to make the most of them on Christmas morning. A good Christmas breakfast in the Philippines is usually comprised of slices of ham served with mounds of garlic rice and scrambled eggs. The whole lot is then drizzled with the same sweet, fruity syrup used to glaze the ham. 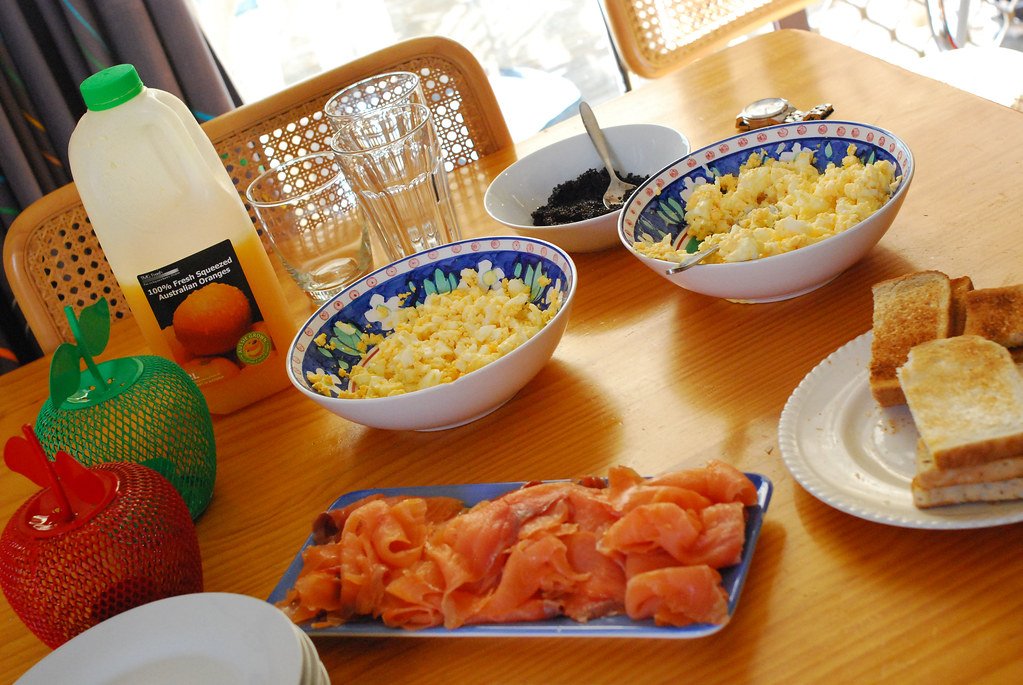 Many foreigners are puzzled at how much emphasis we Filipinos put on food, but it must be said that for us, the sharing of a meal is symbolic of the family ties that are such a keystone of our culture. And for an OFW who is sorely missing their kin, such cravings are as much for the memory of home as for the taste of the dishes themselves.