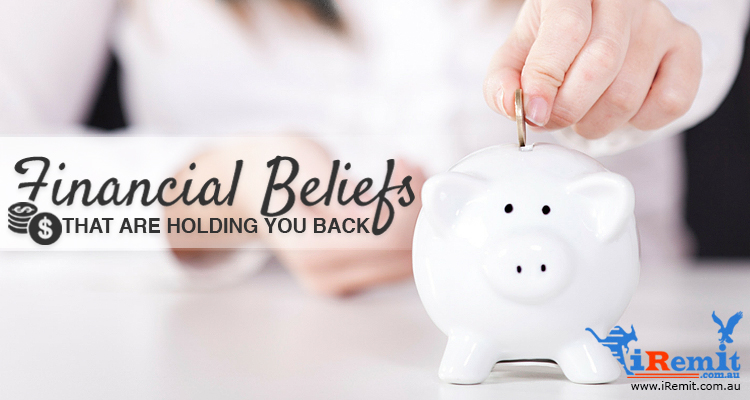 10 Beliefs About Money That Are Holding You Back

Much like politics and religion, money is a topic that’s often banned at polite dinner tables. Apparently, it’s poor form to moan about one’s financial troubles or to gush about how well your bank account is growing, so most people avoid the subject altogether.

Unfortunately, the lack of dialogue surrounding money also leads to the spread of misconceptions regarding such. Some are simply odd, while quite a few are potentially harmful.

Here on iRemit, we believe in having informative conversations about money, if only to help our valued customers with making the most out of their hard-earned bucks. So, today, let’s talk about a handful of the most damaging financial beliefs that need to be set straight:

You’re only young once, so why should you worry about your golden years when they’re still decades away, right?

So, if you start saving up at the age of 25 and you manage to do so consistently, you would end up with more money than someone who started saving up ten years later, even if s/he put away a bigger amount of money than you did.

There are actually two kinds of debts: good debts and bad debts. Good debts are those that help you generate income and increase net worth.  Examples are student loans for a college degree, business loans for setting up a well-planned small-medium enterprise, and property loans for purchasing real estate that accrues rental income.

Bad debts, on the other hand, are the ones used to purchase things that depreciate in value. Car loans, for instance, can be considered a bad debt. Credit card debt is perhaps the most common, especially if you use your credit card for impulse buys like new clothes or shoes that you don’t really need.

The bottom line is, if you plan on going into debt for something, make sure that it will eventually pay for itself and yield dividends for you too.

3. “The husband should always be the one controlling the family finances.”

“A successful man is one who makes more money than his wife can spend. A successful woman is one who can find such a man.” “Men earn, women spend.”  There are simply too many sayings out there that make women out to be irresponsible with money, perhaps because the world is only recently getting used to the idea that the female half of a couple can be the family breadwinner.

This, of course, is complete nonsense. My great grandmother put up a business at a young age, sent my great grandfather to college (along with her numerous siblings), and provided a comfortable life for all five of her children, despite having only a high school degree herself. My own mother takes care of the household budget, oversees a significant portion of the family business, and signs off on both major or minor expenditures at home and at the office.

The trouble with this belief is that it not only belittles women, but also places undue pressure on men to be good with money, whether they actually are or not. Whoever ends up in charge of the purse strings should be decided based on their ability to balance a budget, not their gender.

Ah, adulting. It’s that stage in your life when you’re paying your own bills, holding down a job or managing a business, and basically wiping your own bum.

Because you’re supposed to have your crap together (or at least look like you do), many adults shy away from asking for financial advice, but that shouldn’t be the case. Most educational curricula neglect teaching students about the basics of financial management, such as budgeting or expense-tracking, so it’s natural to feel a little lost.

There’s nothing shameful about not knowing how to create a budget, only in not reaching out to an expert who does.

If you’ve never seen a typical Filipino soap opera, the plot goes like this: a rich guy falls in love with a poor girl, and his rich parents (you know, the kind who wear neckties and sport Imelda Marcos-style hairstyles even when they’re just lounging around the house) move heaven and earth to make sure those two stay apart, probably so that their son can marry the daughter of their equally rich friends instead, true love be damned. What’s the moral of the story? People with a lot of money are evil.

Here’s the thing, though: money is neither good nor bad. It just magnifies what was already there in the first place. If you have always been kind and generous, you’ll be even more so if and when you get rich. The inverse is also true: if you’ve always been selfish and greedy, all that money will just enable you to be even more cruel to those who aren’t as lucky.

So, if you’re confident that you are a good person, get rid of this belief and work on making yourself wealthy so that you can help other people become the same. When you think of all the kids you could grant scholarships to and the number of free vaccinations you can sponsor, being loaded doesn’t sound so evil now, does it?

By the way, the original Bible quote actually goes, “For the love of money is the root of all evil,” so as long as your life doesn’t revolve entirely around the pursuit and the hoarding of money, your soul isn’t necessarily in danger, no matter how large your bank account might be.

6. “You should work hard for your money.”

Hard work is important, and neither talent nor intelligence alone is a substitute for it if you want to be successful. There’s also no issue with taking pride in and enjoying what you do for a living.

This mindset is only harmful if you think that 60-hour work weeks that sacrifice all semblance of your personal life are the only way to achieve financial independence. Despite how much you might enjoy your job, you certainly don’t want to live from paycheck to paycheck for the rest of your life now, do you?

So, while you work hard for your money, you should also find a way to make your money work hard for you. How? Read up on investments like stocks, real estate, or even small businesses that can multiply what you are already earning.

It takes so much effort and money to successfully migrate to a prosperous country from the Philippines, so we often assume that someone has made it once they become a full-fledged OFW. The seemingly continuous stream of new trainers, new cell phones, and other pricey doodads that an OFW’s family receives can also contribute to this misconception.

However, OFW’s would probably be the first to tell you that while the exchange rates make their paychecks go so much farther here, they make countless sacrifices to earn them. That expensive new Samsung Galaxy phone on your classmate’s Instagram? His or her OFW parent probably spent months working overtime shifts and refraining from eating out to afford it. That beautiful house that your neighbors are building? Their OFW relative likely lived in a shoebox apartment for decades to save up for the house’s construction.

Why is this belief harmful? First, it makes people dependent on their OFW relatives. If Mama, Papa, or Tito/Tita makes so much money in Australia, why should they strive to get a better job?  Second, it limits people’s aspirations. There’s nothing wrong with wanting to be an OFW, especially if you’ll be helping your family by becoming such, but it shouldn’t be the end of your ambition.

As much as possible, your end goal should be to set up enough income streams that will allow you to go back home and still be able to enjoy a comfortable life with your family, not just to become an OFW for life.

The fact that the Christmas season begins as early as September in the Philippines tells you how much we Filipinos love to party. Celebrating a special occasion isn’t bad, but this fiesta mentality becomes a problem when people consider big parties to be a necessity rather than a luxury.

Your kid might not turn 7 or 8 every day, but that doesn’t mean you should go into debt to give him or her a fancy party, especially when the child is too young to appreciate the benefits of a fog machine. And if your family is already having trouble paying for your college tuition fees, having an extravagant 18th birthday party or debut would only make things worse.

Besides, celebrations should be all about spending quality time with those dear to you. Whether you do so lavishly or not shouldn’t make them any less meaningful.

9. “Splurging on something will make you feel better.”

Shortly after my first break-up, I went on a shopping binge and ended up blowing Php20,000 (AUD571)  in less than 48 hours. I bought the most ridiculous things: an excessively-ruffled Marie Antoinette-style corset that I only wore once for a photo shoot, three pairs of skinny jeans (despite having four existing pairs), and a pair of pointy zebra-print pumps.

And it did feel good. For the first thirty seconds, anyway.

Buyer’s remorse happens when you regret buying something expensive, especially when you didn’t really need or even want it in the first place. If you’ve ever made an impulse buy because you were too hungry, angry, lonely, heartbroken, or tired to resist, you know exactly how this feels like.

Still, these situations are good opportunities to cultivate better spending decisions. For example, rather than splurging on another overpriced frappucino from Starbucks after you got yelled at by your boss, why not try calling up a friend or a family member to talk about it instead? You’ll feel so much better, and it won’t cost you a cent.

The key to a successful savings plan isn’t really quantity, but consistency. If you can set aside around Php2,000 (around AUD57) each month, that amounts to Php24,000 (around AUD684) per year. It’ll be hard at first, but you’ll get better at spotting creative ways to save a buck or two once you get used to a saving mindset.

Plus, saving is actually as addictive as spending. Once you see your bank balance growing, you’ll feel rewarded and you’ll be even more motivated to commit.

Lastly, if you learn early on how to handle a small salary, the less likely you’ll fall into the lifestyle inflation trap when you make more money later on.

Continuous learning is crucial to managing your money better, but so is the occasional unlearning of long-held beliefs or misconceptions that aren’t doing you any favors. Thus, don’t hesitate to let go of these on your path to financial independence.