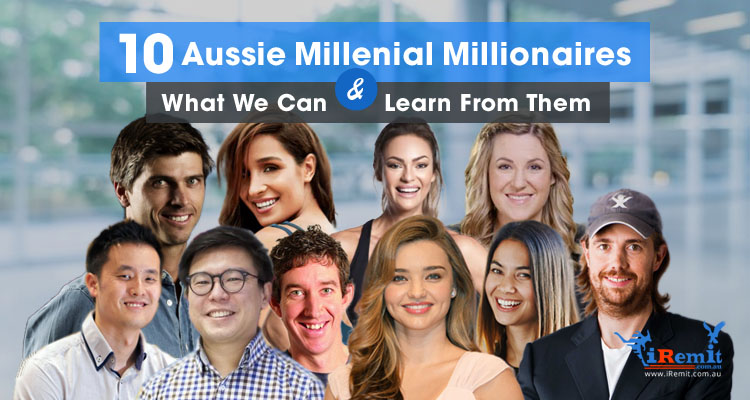 10 Aussie Millennial Millionaires And What We Can Learn From Them

They say that it helps to have a role model when you’re off chasing your dreams.

Having one apparently assures you that what you want to achieve is possible (assuming that your #lifegoals peg has done something similar to what you want to accomplish), and can also help you come up with your own roadmap towards the said goal.

Millennial millionaires are fascinating because they’ve managed to become financially stable in half the time it takes a normal human being, and then some. Since the first month of 2018 brings with all sorts of New Year, New You challenges, let’s take a look at some of Australia’s most successful millennials from last year as well as what we can learn from their journey:

Talk about deriving business inspiration from an urgent need. Fung and Lui established AirTasker back in 2012 in order to match customers requiring people to do odd jobs (e.g., assembling flat pack furniture, house cleaning, dog walking, and even clearing up after a party) with workers able and willing to fill that need.

To date, over 1.6 million Australians have used the app, and the young duo have seen their combined wealth swell to AU$41 million in just five years. Emboldened by such success, the company is now gearing up to make its first offshore expansion into Britain.

These days, the smokin’ hot former Victoria’s Secret Angel is married to one of Snapchat’s co-founders, but she’s actually been a self-made success in her own right long before they even met. Not only was the Aussie native known for wearing the 2011 fantasy bra mere months after giving birth (yes, I consider that an achievement, just check out the link!!!), but Miranda Kerr is also the CEO of Kora Organics, her own organic cosmetics line, and is worth an estimated AU$45 million.

The 34 year-old is a prime example of how you can build a business around your advocacy as well as how constant learning could help you reinvent yourself and stay relevant in more ways than one.

Not bad for a single mum, eh?

One of the two wealthiest women on last year’s rich list, Perkins pretty much brought graphic design to the masses, so to speak. The half-Filipina millennial was frustrated by how long and complicated the process of designing publicity materials often took, so she came up with an idea for a simplified graphic tool that would suit most people’s needs.

Thus, Canva was born as a one-stop shop for graphic design. The start-up’s excellent service was so well-received that it garnered over a million users within 12 months of launching.

Perkins’ net worth is estimated at AU$128 million, and Canva has even made its way to Makati, Philippines, with its offices attracting all sorts of brilliant people who all subscribe to Perkins’ philosophy of ensuring an unforgettable user experience for each customer.

Topping the rich list for the sixth consecutive year are Atlassian co-founders Cannon-Brookes and Farquhar.

Their software is a great illustration of how important it is to consider global trends when putting up a business; Atlassian happens to own quite a few of the must-have apps for remote working (i.e., Trello and JIRA), which is rapidly becoming the norm across the globe.

And as telecommuting became more and more popular, so too did the demand for Atlassian’s services. This year, Cannon-Brookes and Farquhar reported a combined net worth of AU$6.08 billion.

Skye is something out of the Kardashian mold. The fitness guru leveraged her 10 million-strong following on Instagram into a wellness empire that has hundreds of thousands of people in Australia, Canada, the US, and Britain paying for her online exercise and diet plans, thus amassing an AU$32 million fortune.

Goes to show that in the age of social media, marketing a good product through the right channels can bring in astronomical sales.

There really is money in the wellness industry. Much like Skye, Itsines made her way onto the rich list by promoting her fitness routines on social media. If you’ve been scrolling down your Facebook feed recently, you may have seen her videos about how you can work out practically anywhere.

What makes Itsines’ workout routines such a hit is that they are perfect for people who find working out at the gym rather intimidating, thus emphasizing the rewards for businesses that can figure out their target market’s needs and respond to them accordingly.

Half of a CEO power couple, Ta’eed is both the richest woman in Australia under 40 and the highest-placed female on last year’s rich list. She and her husband co-founded Envato, an online marketplace where creatives can hawk their graphics for commercial purposes.

Like her contemporary Melanie Perkins, Ta’eed capitalized on a niche in the market and found a way to bridge its participating customers and suppliers. Another great takeaway from her story is that it’s certainly possible for spouses to build a great business together, and that having the same vision can strengthen a relationship in both the personal and professional sense.

As if you needed more proof that data is the fossil fuel of the future, Richardson accumulated AU$607 million with his co-founder Dave Greiner years after they launched Campaign Monitor, a Sydney-based web company that enables its users to distribute mass-marketing emails and then track its engagement rates through the data coming from the said campaigns.

Interestingly, employees at the ultra-modern Campaign Monitor office are encouraged to work no longer than necessary, perhaps as a nod to how a good work-life balance can have an impact on the quality of work that people churn out.

To be clear, we don’t all have to end up as millionaires to be considered successful at life (or heck, even at this whole New Year, New You trend). Financial stability aside, the skills and qualities that you pick up on the way are equally noteworthy: discovering your purpose, finding significance in what you do, and being able to share your gifts with the world.